It is with great sadness that we announce that Michael Druitt passed away peacefully on 16 October after a short illness.

For 60 years Michael Druitt worked with the top restaurants and hotels in London and around the country. His career began as an apprentice in the cellars of Brown, Gore and Welch and then as a salesman for the company. In 1962 Michael moved as a Director to Mentzendorff and so began a long association with champagne and Bollinger in particular.

In 1975 he left Mentzendorff to set up Michael Druitt Wines and built up an enviable portfolio of wines and spirits including UK agencies for Perrier-Jouet Champagne, Berberana Rioja, Leon Beyer Alsace wines, Brown Brothers of Australia and Makers Mark Bourbon. He was an innovator and among the first to introduce wines from Canada, California, South Africa and New Zealand to the UK.  In 1996 Michael, his London sales team and many of his suppliers joined the Hallgarten team and the company was renamed Hallgarten Druitt in a move which heralded the ‘modern era’ of Hallgarten & Novum Wines long history. 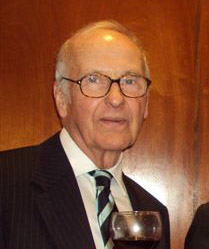 Michael fully retired from Hallgarten over 10 years ago but retained a few key customers (friends) and a keen interest in the continuous development of the business which he helped to create; he and his wife Dorothy continued to attend tastings and events to support the Hallgarten team right up to the beginning of the year.  Outside his direct business interest, Michael was on the judging panel of the Master Sommelier competition, and was a past Master of the Worshipful Company of Distillers.

In his heyday Michael was undoubtedly one of the big characters of the London restaurant and wine scene and even today many of his customers have great stories to tell of their time working together.

This is a one of our favourite pictures taken in 1975 with Michael Caine and featured in the first edition of Decanter magazine.

Michael leaves behind his wife Dorothy and children Miranda, Chris and Caroline. His son Jeremy who had also worked in the wine trade died in 2018.  Michael will be affectionately remembered by all who knew and worked with him.