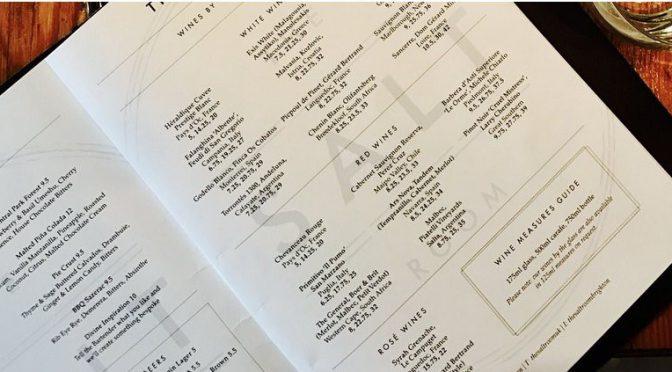 So let’s just say I’ve got some previous with wine descriptions on lists. Saying that I’ve got beef might be a little strong, but you could definitely conclude that I’ve had a love-hate relationship over the years.

From very early on in my wine career I decided that the generic descriptions made available to sales reps left a lot to be desired. Now this sounds a little arrogant but I remember thinking at the time, they don’t really mean anything, let alone activate sales. Let’s take a look at the following tasting note and see how inspired we all feel:

‘A lovely, refreshing wine with aromas of grapefruit, citrus, stone fruits and delicate notes of fresh acacia flowers on the nose.’

Blah, Blah, Blah! It’s just so boring and are consumers really that interested in this kind of information? Do they even know what acacia flowers smell like? I don’t, and I love a bit of gardening. I’ve always believed that customers would only read one or two generic descriptions before switching off. Anyway, more on this later, but for now let’s get back to a young Joe Wadhams who thought he was going to reinvent the wine description. So the first problem that I encountered was that writing your own quirky descriptions takes a very long time. You’re constantly trying to not repeat yourself – which when you’ve got a limited Essex vocabulary like me was pretty tough. My theory was simple though: try to describe the wine in a way that consumers could relate to, and try to make them laugh at the same time. Some were definitely more random than others. I once described an Assyrtiko as a ‘volcanic Chablis on steroids’ or I might have even said it was ‘like licking a volcano’ – I was drinking solidly back then so it’s a little hard to recall. So you get the general idea, they were pretty random but strangely consumers were lapping them up. They actually sat at the table and took the time to read them, I was amazed but at the same time I felt vindicated. If you want someone to read something just make it interesting.

Anyway fast forward a few years and I moved onto one of the big boys in our industry. So my less than orthodox talent for writing rubbish and getting people to read it soon got noticed. Before I knew it I was thrust into a huge project with Matthew Jukes to write interesting descriptions for about 100 of our wines. Let’s just say our approaches were a little different, but after a couple of months we’d completed the mission. Matthew’s way of writing is fantastic but his descriptions were incredibly detailed, so I was tasked with giving them a little trim. So you could say that for two months I was Matthew Jukes’ Editor – I like the sound of that.

Moving on a couple of months and I was standing at our portfolio tasting and the company had decided to put some of our wine quotes up on the wall. One of the ones they used from me I’d actually ripped off Olly Smith after I’d seen him on the box. I remember it as if it was yesterday – ‘this wine is like taking a chair lift up the rock face of sheer freshness’. So you can imagine my unease when Olly and I are standing under this quote at our tasting with his eyes moving upwards towards my undoubted plagiarism. He took one look at me and then thankfully we both started laughing!

It’s safe to say that after this period I completely lost the plot. I’d quite simply OD(ed) on writing descriptions so I then took them in a new direction. I decided I no longer wanted to tell the customer anything about the wine, and instead concentrated on writing descriptions that made little sense. Two of my weirdest were as follows:

‘A smoking jacket and beagle are recommended with this Claret’

And my all-time favourite:

The crazy thing is customers still loved them. It does make you think that customers just want to read something that’s engaging. This reassured my belief that notes about flavour mean very little to the average consumer.

After this period of tasting note madness I went into retirement and haven’t written a wine description since. I reckon my hiatus has lasted for roughly 8 years now. During this period I played around heavily with style headings. My theory was that many consumers only needed to know what style of wine it was. For example with whites were they Crisp, Aromatic or Rich. This approach might seem incredibly simple, but it seemed to work a treat and did make training staff a whole lot easier. Plus I was no longer sitting up half the night spewing out random quotes from Anglo-French poets!

So as I’ve said, this carried on for some time until the other day when I was hosting a tasting with one of my key accounts. We were tasting a wine from Kefalonia which is aged underwater, and to be honest is a little leftfield but damn good. The common consensus from around the table was, ‘we love it but how are we going to sell it’? I then had some sort of out of body experience and shouted across the table, ‘why don’t we do descriptions’?

I tried to catch the words but it was too late, I’d said it. So it looks like I’ve now gone completely full circle and I’m back where I started. What style am I going to go for? I think they will definitely be more grown up but I’m hoping they will still be interesting. My boss sent me an email the other day about a new Mencia we’ve brought in from Ribera Sacra. He said: ‘A sort of mid-way point between Pinot Noir and Syrah, but with high acidity’. I thought to myself, if I can combine information like this with a touch of light humour the balance would be perfect. So wish me luck.

The reality is descriptions can work but let’s make them count, and try to engage and relate to the customer. If we don’t that really would be a waste of ink.