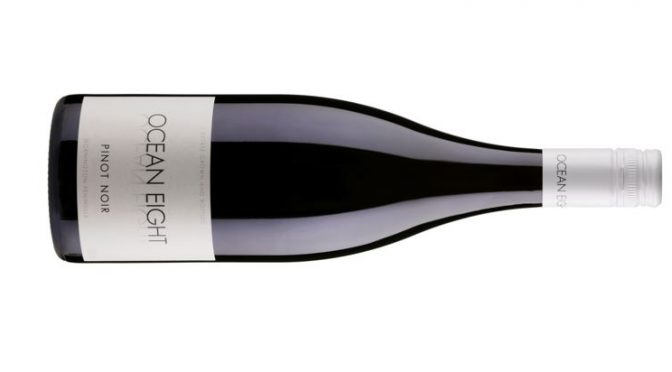 In his 2018-19 100 Best Australian Wines report, Matthew Jukes, describes how the Ocean Eight, Pinot Noir 2015 manages to; ‘capture the most evocative and aromatic vanguard of fruit and launch it at you with such accuracy that it takes your breath away.’

A modern style Pinot Noir full of summer pudding and cranberry flavours, vibrant and peppery on the finish.

Owned by the Aylward family – founders of the renowned Kooyong winery- Ocean Eight was established in 2004 in the southern and cooler side of Mornington Peninsula. In their state-of-the-art, temperature controlled, gravity fed winery, winemaker Mike Aylward produces stunning cool climate Chardonnay and Pinot
Noir, taking influence from the great old world wine regions of Alsace, Burgundy and Champagne. All the grapes for the Ocean Eight wines are sourced from the family’s 17 hectares of vineyard and their total production each year is just 5,000 cases.

The grapes were hand-picked, meticulously hand sorted and destemmed. A cold soak took place for three to four days, prior to fermentation which took place in an open vat, using natural yeasts. Fermentation lasted for a period of four to six weeks, to maximise the aromatics. The wine was pressed to old oak puncheons of three to four years and matured in oak for 12 months. This wine was not filtered or fined prior to being bottled. 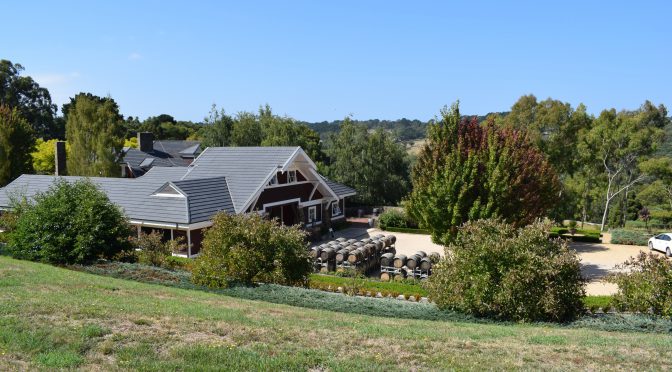 If I could start all over again and work as a winemaker, then this would be the sort of place in which I would choose to work. It’s just the right size, being housed in a converted stable, it adjoins the house, it smells and looks pristine clean and modern and there is absolutely no fear of seeing something scampering across the floor out of the corner of our eye. My wife would say: “How cute!” Oh, and when you step outside you have a view that God has created in very few places.

Mike Aylward recognises his good fortune. He has inherited the business from his father Chris, who with his wife, Gail, started producing wine on the Mornington Peninsula in 1997. They developed Kooyong with a focus on top quality wine that suited the climate. Kooyong was sold in 2004 to the Gjerja Family, the owners of Port Philip Estate. The Aylwards then developed a new set-up, creating a 27-acre vineyard and building the Ocean Eight winery, temperature-controlled and gravity-fed, into the hillside at the family’s property in Shoreham. While waiting for the first crops to be picked, Mike, their son, travelled extensively through Burgundy, Alsace and Champagne to look at styles. And so what started as a part time job to earn a few dollars during his university days has now turned into a committed obsession; in 2011 Mike won the highly coveted “Young Gun Of Wine” award.

But he still appears as a slightly dishevelled university student. Avuncular and languid are terms that don’t begin to do him justice, and he is an genial character. But don’t let that typical Aussie laid-back attitude fool you; he is firm of conviction beneath a softly spoken delivery. He thinks that nowhere else in Australia does Chardonnay as well as the Mornington Peninsular and, when pressed, shyly suggests that the family’s Veuve Chardonnay was the style-setter among Mornington Chardonnay’s, being definitely European in style, and with elegance rather than body the defining characteristic (though he admits it does help when Jay Z and Beyoncé are photographed quaffing your wine in a Sydney restaurant!)

With Mike’s opinion that his house style is all about elegance and subtlety being noted, we settle down to a tasting:

Pinot Gris 2016 – whole bunch picked and aged in old barrels, which Mike says is essential to develop the complexity this grape requires. Grapefruit and coconut. Very inviting combination. Hugely quaffable. You could sit at the bar and drink this all night long.

Verve Chardonnay 2015 – never was a wine more aptly named. A wonderfully deft nose – intense grapefruit and galia melons, but so delicate that you almost have to hunt for the flavour. A teaser – where is it going? It is already very good but will get immeasurably better when the flesh opens out a wee bit. Haunting. When I put him on the spot in terms of contrasting with Burgundy, Mike shyly posits that he hopes this would be seen some way between a Chablis and a Chassagne-Montrachet.

Pinot Noir 2015 – ravishing purple robe. Soft very intense red fruits (red pear especially) on the nose, followed by Morello cherry. Has a rasping newness to it, but there are enough tannins and acidity to ensure this will last for a long time. Mike says that 2015 and 2016 were really good and that 2017 has the potential to be very good.

Pinot Noir 2016- this is very young and still developing, but has a lovely, spicy nose and spritzy fruits of the forest on the palate.

Aylward Pinot Noir 2014 – wow, this is sappy, rich, juicy, big and completely different to the other pinot noirs. This will develop over a long period.

Before I leave, Mike takes me on a tour of the gardens and the vegetable plots (they are almost self-sufficient.) Everything seems correct here. And in the wines, there is elegance and subtlety at work. There is not a single off-flavour or scent in any of the wines (which are often present when I visit Burgundy). They are definitely feminine in style and charming in delivery. You get the impression you would never be disappointed with a single bottle of these wines. Why would you drink anything else again?