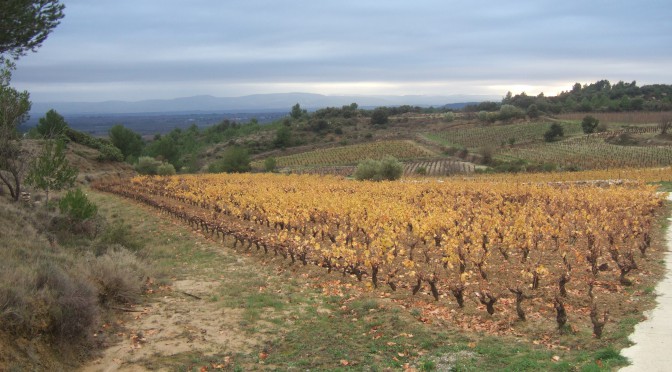 The landscape changes as you drive south along the A61 from Toulouse, the plains of the Acquitaine giving way to the craggy and jagged Occitainie. The first distant view of Mont Tauch to your right is a thrilling one.

Due east of La Livinière, you leave the road and drive onto a winding dirt track. Enclosed within a small stone wall is a patchwork quilt of vineyards. You park the car and start to walk up a steep hill. Some of the vines are 60 years old, gnarled and majestic. It is a small estate – nine hectares – and it doesn’t take long to reach the top of the hill. You stop here, turn around and survey the steep slope behind you. Below are the vineyards of Minervois, then on the other side of the valley, Corbières. Further away are the Pyrenees and, to the left, the Mediterranean. Mourvèdre has to see the sea, as the saying goes. You walk further and crest the hill and here the view is of the Black Mountains and, beyond, the Cévennes, stretching towards the Massif Central. A farm labourer and his donkey – she is called Victoria – are working the vineyard. You feel an almost imperceptible change in the temperature. Nestled in the vines, is the small, stylish but unobtrusive winery.

Nineteen years ago Gérard Bertrand stood on this very spot, facing south towards the sea, just like the Mourvèdre. Was he thinking of his father, who helped found the appellation of Boutenac over the highway in Corbières? This, he decided, was his destiny. This is where he opted to make his masterpiece. And to do so using biodynamic methods.

This is Clos d’Ora. It is exposed to two different climates, the maritime and the mountain which produces a wide diurnal difference, and straddles a geographical fault, a meeting of two plates. The ground is clay and marl on the maritime side, favouring Carignan and Mourvèdre – wild concentrators of fruit – and sandstone and limestone on the other side of the hill, where Syrah and Grenache flourish.

Olivier, one of Bertrand’s winemakers, shows us around the small winery. There are nine tanks (one for each hectare) all spotlessly clean, all gravity fed. They use only indigenous yeasts.

“The problem is that people “get” organic winemaking,” we say, “but they struggle with biodynamic winemaking. How do you explain it?” And we – the importers – launch into a discussion amongst ourselves about the definitions of biodynamism, with the shifting of the moon’s moods, the tides, the burying of the bull’s horn and the astronomic calendar with its root days and fruit days. But what does it do to the wine? And we begin to tie each other in knots.  Olivier is so patient with us. He gives a small cough. “Well, what it comes down to, is that it adds freshness and acidity.”

Which stops us in our tracks. Freshness and acidity.

“In our estate at Cigalus, when we converted to biodynamic winemaking, we did it slowly, with five hectares, then ten hectares and so on. And each year we could tell the difference between those batches and the rest. So then we converted everything.”

But, we say, we need a new name for “biodynamic”. “Natural” has already been taken by one set of winemakers. “Pure” is good, that might do it. But again, Olivier trumps us. “You should just say… because it tastes better.”

Because it tastes better. Two weeks ago during another buying trip to the Languedoc, one of the winemakers in Argeliers lamented: “This region needs new leaders. It is going nowhere. We need an ambassador for the paysan.”

But the answer is there. They already have their ambassador. Gérard Bertrand, whose challenge is to find new terroir, revea ling it through the development of biodynamic winemaking (his words), is already changing the way the Languedoc is perceived. He would be a demanding man to work for, you’d think, as you stand on the same spot he did. But as one of his workers told us: “Where would I move from here? Any move would be a downwards one.” Such are the demands of excellence. But, thinking of a different sport to Bertrand’s, are Conte, Mourinho, Klopp any different? Do players choose to work with them, or choose to leave? And what about us as importers? What do we choose to do?

We have chosen excellence. Me, I’m for the future