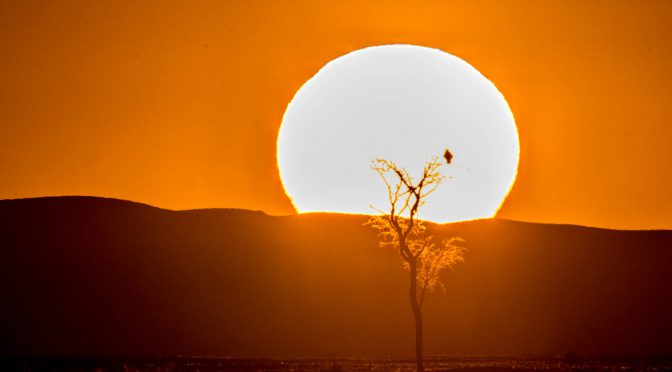 Walking amid the vines in the Roman Road vineyard with Charles Simpson, we are interrupted by none other than Oz Clarke, here to film a piece for ITN news about the rise of English wine.

Clarke, who opened the winery in 2016, said: “I grew up around here and I know the Elham Valley well. It is seriously chalky, well protected and south facing – very similar to Champagne.”

In his book on English wine, Clarke states that he had been making speeches about the effects of climate change since the early 1990s “to deaf ears, frankly.” But he knew that Champagne was about one degree warmer than southern England. Yet Champagne had been warming up all through the 1980s and 90s, so didn’t that mean that England could now produce what Champagne did a generation earlier? And – unlike Champagne – English winemakers tended to make still wine, too.

Expanding on this, Clarke suggests that the effects of climate change and global warming could be catastrophic for parts of the world – but if there is “one place where climate change has completely transformed a way of life for the better, it would be in the vineyards of England and Wales.”

Later, in the tasting room, sampling the stunning Simpsons wines in advance of listing them, we are reminded just how far English wine has come. Are these chardonnays from Chablis or from England – they are simply amazing! Is this all down to climate change?

Is this because of the Heat? Before us are rows and rows of wine samples, some in unlabelled lab-type sample bottles, and some in their finished labelled bottles. The tasting team take one last glance out of the window at beautiful downtown Luton and then begin the process of spitting and slurping as we make our selections.

This morning we face dozens of wines from France; some we accept, some we reject. But one thing is constant: time and again Steve will say: “This does not taste like Sancerre.  This is too rich, it’s too fat.” They’re not necessarily bad or faulty, Steve says. “But they don’t taste like they used to when I came into the trade. Have the French forgotten how to make Sancerre?”

Or is it now just too warm to make Sancerre as we know it? And is this caused by climate change? The Heat?

Estelle Roumage looks out over her vineyards in the Entre-Deux-Mers and explains to us how she is trying to cope with global warming.

“We are planning to plant other varietals in order to adapt to climate change, and avoid over alcoholic wines. We are aiming to introduce Castets in our future plantings, most probably in 2023.

“Also, one of the adaptations we have done over the past years is to not thin the leaves automatically on every plot, which was a common practice in the 90s and 2000s. We only do it now on the eastern side of the row (morning sun), or sometimes not at all.” The discussion moves into the mainstream when Eric Asimov brings the topic to the attention of his readers in a series of articles in which he discusses how climate change has affected the wine trade, describing how producers have experimented with adaptations, not only to hotter summers, but also to warmer winters, droughts and the sort of violent events that stem from climate change: freak hailstorms, spring frosts, flooding and forest fires.

“Farmers have been on the front line, and grape growers especially have been noting profound changes in weather patterns since the 1990s. In the short term, some of these changes have actually benefited certain regions.”

Places, like England, said Asimov, which were historically unsuited for producing fine wine, have been given the opportunity to join the global wine world. The Simpsons are certainly proof of that!

In other areas like Burgundy, Barolo, Champagne and Germany, where great vintages were once rare, warmer growing seasons have made it far easier to produce consistently exceptional wines.

But “even with such success, the character of these wines has evolved in part because of the changing climate — in some cases subtly, in others deeply.”

Is this what Steve is picking up with Sancerre?

The Intergovernmental Panel on Climate Change releases its long-awaited report on climate change. In summary, whether you accept that the human race is responsible for global warming, it is undeniable that the world is warmer than it once was. Since the beginning of the twentieth century, the average global temperature has risen about 1.4° F, with about two thirds of that rise occurring since 1960. Though predictions vary widely, the IPCC states that in the 21st century average global temperature could rise by 11.5° F. If mankind acts, this rise could be reduced to 2° F. However, even at the lowest rise, the planet faces catastrophic, results.

The primary cause of global warming is the “greenhouse effect,” caused by burning of fossil fuels (which is the greatest contributor), widespread deforestation, the loss of natural “carbon sinks,” oceanic acidification, the use of landfills, and large scale cattle and sheep ranching, which infamously causes the release of methane, a non-CO2 greenhouse gas.

Not stated in the report – but highlighted elsewhere – is that one ultimate and terrible consequence of global warming could be a rising sea level. A five metre rise in sea level would inundate some of the planet’s greatest vineyards and wine producing regions with flooding. These could include portions of Bordeaux, Portugal, New Zealand, Australia׳s Swan district, and California׳s Carneros appellation. Added to the coastal flooding, more inland vineyards could face heightening levels of salinity in ground water which could affect vine growth. Earthquake is another threat, triggered by rising sea levels.

Negotiators from nearly 200 countries sign the Glasgow Climate Pact, aiming to turn the 2020s into a decade of climate action and support.

Nations reaffirmed their duty to fulfil the pledge of providing 100 billion dollars annually from developed to developing countries. And they collectively agreed to work to reduce the gap between existing emission reduction plans and what is required to reduce emissions, so that the rise in the global average temperature can be limited to 1.5 degrees. For the first time, countries are called upon to phase down unabated coal power and inefficient subsidies for fossil fuels.

They are already happening. The consequences.

The wine map has been extended (witness Simpsons Wine Estate). Wine grapes have always grown in narrow geographical and climatic ranges where temperatures during the growing season average 12-22°C (54-72°F). But winemakers are growing grapes in places once considered too cold for fine wines. In pursuit of the best sites, wine producers are moving north in the Northern Hemisphere, and south in the Southern.

Producers are now planting vineyards at altitudes once considered inhospitable to growing wine grapes, seeking relief from long exposure to the sun, and – crucially – where the night time temperatures plunge. Today, vineyards in the regions of Salta, such as those of Piattelli, are at altitudes of over 6,000 feet.

Winemakers are looking at different varietals, sometimes planting varietals which can withstand warmer temperatures (witness Estelle Roumage). In Bordeaux, where producers may use only use permitted AC grapes, seven additional grapes have been selected for experiments to determine whether they can be used to mitigate the effects of climate change: The four red and two white approved varieties are well-adapted to alleviate hydric stress associated with temperature increases and shorter growing cycles. The red grapes are Arinarnoa, Castets, Marselan and Touriga Nacional, and the whites are Alvarinho and Liliorila.

It is undeniable that climate change will impact the costs of production. As we have seen, winemakers are already adjusting their practices and adapting their winemaking business for a warmer world.

But the big question is: will wine drinkers accept a new style of wine (witness Steve Daniel)? Will they happily quaff wines from grape varieties suitable for hotter climes, such as Nero d’Avola, Vermentino, Fiano, Vranec and Xinomavro? Will they accept a different flavour profile from their Pinot Noir grown in Burgundy? Or can they bring themselves to drink a Pinot Noir from England?

The Heat Is On.