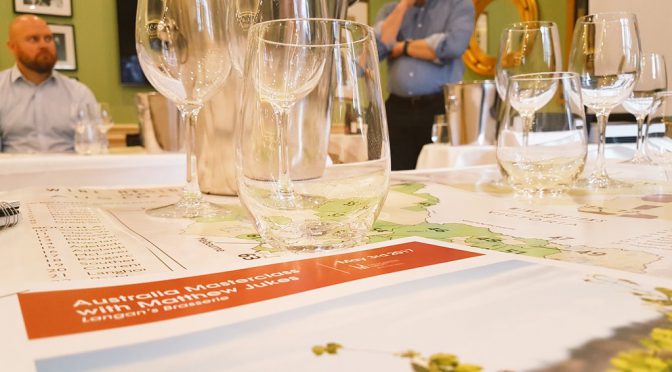 Well, it’s been another busy day here at Hallgarten Towers, with some, let’s say… challenging issues. But today I wear them lightly, then I toss them airily aside. And why? Simple: I have spent most of the day salivating at the memory of yesterday’s spine-tingling tasting of our Australian wines.

The venue was Langan’s, the host was Matthew Jukes, the audience was thirty or so hard-bitten members of our sales team, standing room only ladies n genlmun, all waiting to be impressed.

And, boy, were they impressed! It’s not often that our lot are reduced to simpering moans of appreciation, but… We’d asked Matthew to guide us through a tasting of 18 wines from a selection of the mostly premium producers who make up our list following significant changes late last year. A bit of a challenge, you might think. Not to Matthew…

He begins by running through his early days in the Trade, at the Barnes Wine Shop, where most of the better wines he tasted were… Australian. Thus began his 30-year love affair with Aussie wines, a devotion borne of their brilliance and their diversity, but most of all of the slightly bonkers can-do mind-set of their creators, and their collective craving to make better and better-value wines than anywhere else in the world – and to do a bit of hell raisin’ at the same time.

But Matthew knows this is all about the wines – and we start with a cracker!

The 2016 clos Clare Riesling (with its great history as part of the legendary Florita vineyard) is looking stunning – an “ice pick” of a Riesling, he reckons.

We move on to the Ravenswood Lane Sauvignon Blanc/Semillon Blanc from 2014, with nods of appreciation from the team as they taste the lemon and tangerine palate, deftly charged with a frisson of oak. Uncompromising quality, this.

The 2015 Pedestal (Semillon/Sauvignon Blanc) from Larry Cherubino – “a genius” according to Matthew – is next, and is a great example of “how Larry polishes wine.”

We go down to the McLaren Vale for Rose Kentish’s Ulithorne Dona Blanc 2016, a Marsanne and Viognier blend, its apricot and white peach nose complemented by a touch of lightness from a splash of Pinot Gris.

The next two wines offer a perfect contrast. Ocean Eight’s Verve Chardonnay (2014) and Paringa Estate’s Peninsula Chardonnay (2015) highlight the different philosophies of their winemakers, Mike Aylward and Lindsay McCall. Never was a wine more aptly named than the Verve, as racy a wine as you’ll come across, whereas from ten minutes down the road Lindsay’s love affair and lightness of touch with oak shows in a complex Burgundian mouthful.

Matthew then takes us across Australia to the cold hilltops of Tumbarumba and Eden Road’s Long Road Chardonnay, lean, chiselled and elegant.

We finish the whites with Larry’s Laissez Faire Field Blend, a funky example of how to use a selection of grapes which happen to be in the vineyard – Pinot Gris, Gewurztraminer, Pinot Blanc, Sauvignon Gris. That’s the whites finished, but Jukesy is in full flow now – “Order, order!” – and we crack on with the reds, beginning with another Mornington Peninsula masterclass from the Pinot Noirs of Ocean Eight and Paringa Estate’s Peninsula, allowing Matthew to opine that “there are definitely better Pinots in Australia than in New Zealand.”

We go back to the Adelaide Hills now, this time with Fox Gordon’s Nero d’Avola, which provokes murmurs of approval and an occasional raised eyebrow. God, it is so clean, pristine clean and with amazing sweet raspberry fruit. Sicily, eat your heart out.

Our first glimpse of the Barossa, now, and Teusner’s Joshua (Grenache/Mataro/Shiraz). The genius of Kym Teusner, says Matthew, lies in forging great partnerships with growers with access to really mature fruit. The Joshua looks great, overflowing, cascading, gushing with fruit.

And the hits just keep comin’ – Fox Gordon’s Eight Uncles Shiraz is next up, and the primary fruit flavours jump out of the glass – plums, damsons – and then, miraculously, just a hint of smoke.

The contrast between this and the next – the Eden Road Long Road Syrah – provokes some comment. This is so much more Syrah than Shiraz, with an earthy, textural feel to it.

We go now to Langhorne Creek, and the great story of Greg Follett, who persuaded his dad to let him become a winemaker rather than a grape grower – with spectacular success (the amount of awards he has won is legion). His Bullant Cabernet Merlot is an easy wine to understand, a lovely claret lookalike at a fraction of the price.

Back to Teusner, and the first 100% Cabernet Sauvignon in the tasting. We’re all smacking our lips now, and wondering if it can get any better. God, this is lovely Cabernet, with perfumed fruits of the forest to the fore.

On to an old favourite, Bob Berton, our longest-standing producer. “Captain Bob,” as Matthew calls him, can turn his hand to almost any style, and here we have an amazing Coonawarra Cabernet with masses of cedar fruit.

We end with a masterpiece – Larry Cherubino’s Margaret River Cabernet Sauvignon 2014. This is in a class of its own and able to compete effortlessly with St Julien. As we wind down, I reflect that, of course, no-one needs to champion Aussie wine at the price-fighting end. As Matthew reminds us, the work put in by Hazel Murphy in the early days has ensured that Off-trade sales of Australian brands will always be healthy. It is at the premium end where there is more of a challenge. But Verve Chardonnay v Chablis, Paringa Estate v Puligny, clos Clare v German Estate Riesling, Larry’s Cabernet v top-end Bordeaux, the list is endless and it’s all a bit of a no-brainer. As one of our more Francophile salespersons said: “These are proper wines!”

Two hours have raced by and we could have stayed forever. Matthew takes a bow to whoops and cheers, rock star status assured.

What a tasting this was!