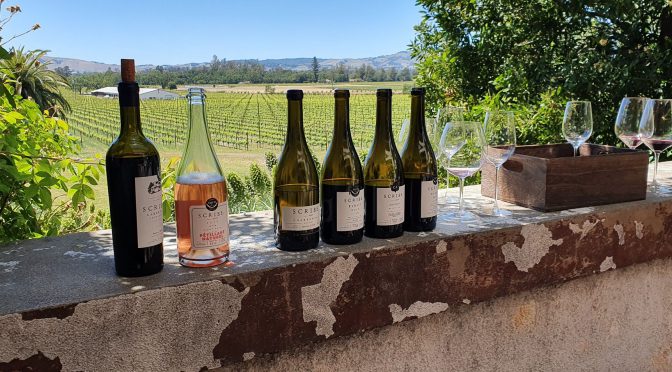 Picture postcard stuff, this: it is a gloriously sunny northern California day, and we are sitting on the veranda of a century-old Hacienda, looking out over the very first parcel of land to produce wine in California, and admiring a Hollywood-type vista of vines and palm trees – and a restored turkey warehouse.

Hard to beat, this wine tasting lark. Heaven on earth. A rose Pinot Noir 2021 is reasonably deep in colour, and has a rich and expressive nose. Others describe it as guava and lime, but I get shedloads of raspberries. It has more body than most roses and has a beautiful firm textured mouthfeel.

But first, some history: in 1858, Emil Dresel, a German son of a wine producer in Weisenheim, emigrated to California in search of his fortune. On 12th March 1849 he purchased 400 acres of land two miles east of Sonoma Square, the spot where, just 10 years before, the Bear Flag Revolt had established California as a state in the American Union.

Emil planted cuttings of Riesling and Sylvaner, brought from his homeland, and possibly the first of those varieties imported to the United States. Emil and his brother Julius went on to become wine industry leaders, fervent Abolitionists, gamblers, land stewards – and intermittent outlaws.

Fast forward to 2007, when fourth-generation California farmers and brothers Andrew and Adam Mariani (of Croatian descent) took over the property, and christened it Scribe. Both had an interest in wine, having spent post-college stints at vineyards in Europe and South Africa. The property was a mess; a dilapidated turkey farm which had served as a brothel and a speakeasy! Over time, the brothers restored its soil, and in the process even unearthed a handful of treasures from its past—Prohibition-era glass and other old china, antique work stools and even opium vials.

“We planted Chardonnay, Pinot Noir and Riesling. We also retained a tiny amount of the Sylvaner  – the only two hectares in the whole of the US – and a precious two acres of Mission,” says Adam.

Adam and Andrew sit before us, a sea of denim and a shared enthusiasm for sustainable winemaking that borders on the evangelical. Impossible to dislike these guys.

As we speak, Matt Ahern, the personable head honcho of the Scribe sales team, pours us the 2021 Rose Pet Nat. This is unusual in that it is a Pet Nat that actually tastes nice! It has a gorgeous nose of pink grapefruit and elderflower and – oddly – nettles. Huge mouthfeel, lots of body and – clean! Very moreish. Expect the Unexpected.

Next up, served with a smorgasbord of hors d’oeuvres, is a 2020 estate Chardonnay, harvested from a vineyard on the slope of Arrowhead Mountain in the southern Mayacamas, which has a steely, Chablis-like feel to it. Adam explains that the weight on the palate comes not from wood but from the intensity of fruit. Again, it has lovely texture.

But there is more to this place than wine. You feel as though you could kick off your boots, put your feet up and stay a long long time. Somewhere I read that Scribe is all about appealing to young, social wine lovers who feel that in a digital world, real luxury is good farming, good food and drink, and good people. The only bit I don’t qualify for is “young.”

Andrew explains that they farm as sustainably as possible, but are “pulling away from “Natural”,” feeling it too restraining. “We don’t call this wine “Orange” he says, as we taste a 2021 Chardonnay. “We call it “Skin Contact”.” It is beautifully aromatic, crunchy fruit and bags of salinity. “We look for nuance,” he says.

An estate 2020 Pinot Noir (about to be replaced by the 2021) has lovely soft red fruit, and then gamey nuances, and on the palate has that ravishing acidity that is the hallmark of good Pinot. Extremely soft tannins.

The wines are great, but we are desperate to taste the fabled Mission (Chile’s Pais, of course.) And, boy, it doesn’t disappoint. The nose is of bark and red clay, and on the palate is lovely soft raspberry jam fruit and those strawberry toffees you used to eat as a kid. Adam describes it as being somewhere between a Pinot and a Syrah. One of the highlights of the entire trip.

We finish with a Cabernet Sauvignon, which I hadn’t realised they made. “We’ve always had a foot in the Napa,” says Adam. They make two, from Atlas Peak East and Atlas Peak West; this is the east version. It is so ripe and juice that Steve describes it as “Bordeaux, but with nicer tannins and without the brett.”

I look out at the scene again. Everything seems so understated, so stylish – even the labels. And it would be easy for Andrew and Adam to look just a little self-assured. But in actual fact they are as courteous and humble a twosome as you could ever wish to meet. Matt is made of the same ilk.

And the hacienda does feel like a home. It was redesigned by artisan friends. Extended members of the family work here in what has been described as a perfectly-curated family business; Kelly Mariani, a veteran of Chez Panisse, looks after the kitchen; there are cushions and soft furnishings everywhere and it wouldn’t surprise you to see Joni Mitchell and James Taylor sitting cross-legged and strumming their guitars  – feather canyons everywhere – (which is appropriate because Andrew’s wife is the singer-songwriter Lia Ices); they have a writers’ residency (one of whom was essayist Sloane Crossly); and you expect at any moment they will all hunker down in front of some burning logs with a wood-fired pizza and the music clunked high.