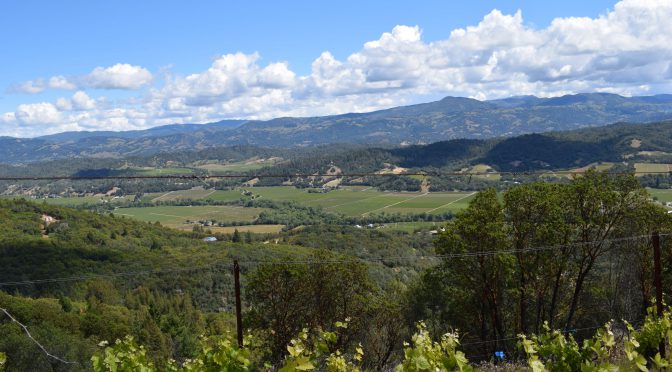 So, we drive away from the Hollywood of Napa, via a homely breakfast of eggs over easy at Calistoga’s famous Café Sarafornia, heading to the more rugged Dry Creek area in the northern part of Sonoma County. Serious Zinfandel country.

If edgy Sonoma is Neil Young to Napa’s The Eagles, then Fred Peterson is your archetypal good ‘ole country boy who really couldn’t give a damn. Built like a brick outhouse, profuse and cussed, he looks like he has never seen a tie in his entire life. Curmudgeonly doesn’t even come close.

At 72, Fred now limits himself to mainly viticultural duties, including that of “main grape sampler,” having handed over winemaking to his son Jamie 15 or so years ago.

We are in their homely winery on Dry Creek Road. But Fred is quick to point out: “At my age, if I’m in the winery for more than 12 hours, I become a danger to myself and others.” You can’t help but grin as you listen to him volunteering his views on the world, all delivered in a booming baritone. Marketing-speak this ain’t. And you think to yourself: it would be easy to underestimate him. But then you remember: this is the guy who was once vineyard manager at Monte Bello and Lytton Springs, of Paul Draper and Ridge fame, and you think: he must bring that expertise into his own wines, surely.

And you’d be right:

Whereas the Bernier Vineyard Zin 2016 has touches of mint and cigar and is a more mature and bigger wine. Complex and reflective.

And the Bradford Mountain Zin 2016 is a bigger beast altogether, dark and deep, more black fruit than red, with a beautiful soft and supple mouthfeel. Fred has an old world winemaking philosophy and a Zero Manipulation approach, meaning that he uses the most gentle, traditional low-tech/high touch winemaking practices to maximise the vintage and the vineyard. The result: No Soulless Wines. Tellingly, he tells us that in the domestic market, his wines fare better with distributors who sell more European-style wines.

He drives us up to Bradford Mountain, where he settled in 1983, building his home and planting vineyards, before founding Peterson Wines in 1987. The views from here towards Mount Saint Helena, are spectacular. But there is also lots of evidence of the terrible damage caused by forest fires.

He points to the vineyard on which he planted Vermentino, Verdelho and Vernaccia, resulting in the 3V White blend, whose 2019 vintage has a lovely soft melon nose and really good acidity. “We pride ourselves in the natural acidity in our wines,” explains Fred. Two other wines which caught my attention:

Even after 45 years in the winemaking game, Fred is still searching, and has just returned from a four-week trip to Alsace, the Loire, Corbières and the Rhone to “re-charge the old batteries.”

Which is exactly what you feel after you’ve spend some time with Fred. Your battery has have been definitely recharged.