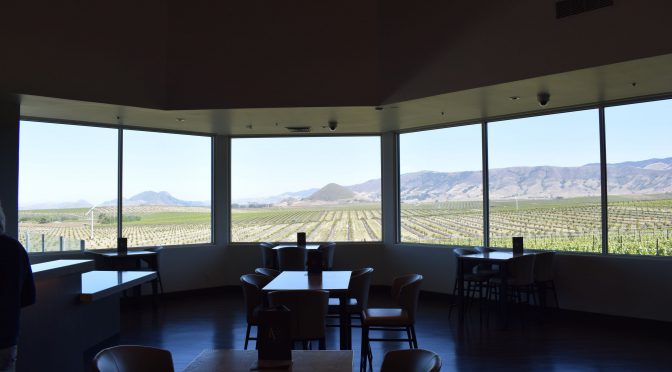 We’re zipping up 101 to San Luis Obispo’s Edna Valley Winery to taste the fruits of a very unusual relationship. Iconoclast extraordinaire Randall Grahm, whom you would think revels in chaos, has joined forces with E&J Gallo, a company for whom efficiency is written into its corporate DNA.

From Cigars (Flying) to the Rhône Ranger, Grahm has a long history of reimagining the traditions of France in a distinctly personal way. And this is his latest gig. The collaboration has resulted in a range called The Language of Yes. Bear with me; it takes some explaining.

According to Grahm, “The Language of Yes” or La Langue d’Oc, is the term that the medieval people of southern France used to describe who they were by how they spoke. The Language of Yes,” a precursor of modern Provençal, is a window to a particular sensibility – the language of the love poetry of the troubadours. “Great wine can only come from vignerons who love their land deeply, and whose love poetry is the vinous expression of their passion.”

On the collaboration with Gallo, Grahm states: “I am particularly interested in vine and grape research, and Gallo’s research capability is unrivalled. Yes, I know, it’s a bit of a Bambi meets Godzilla scenario, but so far, so good, and there are some really astonishing wines arising therefrom and it has been a great experience.” Doesn’t even begin to explain what we are about to taste.

We meet with the affable Matt Steel, who bears the title Gallo Director of Wine, Central Coast, but who in real life is a down-to-earth no-shit Aussie. He will take us through three wines.

Matt puts the three wines in front of us.

And I taste one of the most remarkable wines I’ve ever come across – made from a grape I’ve never even heard of.

Tibouren is an obscure southern French varietal, found sparsely in Provence, but also showing up in Liguria, where it is called Rossese, producing haunting, lighter-bodied reds reminiscent of Burgundy transposed to a slightly rustic octave. Tibouren, of which there is only one hectare in the whole of the United States,  is a grape perfectly suited to pink wine; fruity and juicy but also expressive of a slightly herbal note, sometimes evoking the garrigue or underbrush of the limestone soils of southern France.

This wine is a blend of 65% Tibouren and 35% Cinsault (which Grahm describes as a “tragically misunderstood variety, which might be the Rodney Dangerfield of grape varieties.”)

Raised on its lees for more than nine months, the wine underwent complete malolactic fermentation and was bottled without filtration. The colour is very odd. It’s definitely not pink. It might just get under the radar as a rose, but you have to look mighty hard. To all intents it looks like a white wine. On the nose the first impressions are of style and restraint, with a hint of rose petal and then a feral perfume. The fragrance is drawing you in. It’s seductive. On the palate it appears first to have an evocative elegance, but as you hold it in the mouth a certain texture announces itself. What on earth is going on here? It seems almost like a contradiction. But what a contradiction!

Now we come to the two reds – and this is where it gets tricky. According to Grahm: “The effort is to eschew the intrusive effects of gaudy vinous maquillage, and instead use more gentle techniques to coax out complexity. One such technique is the practice of passerillage, or post-harvest drying of the grapes before crushing; we do this by placing the grapes on paper raisin trees in the shade of the vine itself. This practice allows for a slight dehydration and concentration of the grapes and as significantly, a maturation of the stems. When the stems are more or less lignified, they are an excellent source of tannin, supporting the overall structure of a wine; the inclusion of the whole clusters allows for a slow release of grape sugar into the fermenting must, which improves the kinetics of the fermentation, thus creating a much slower and controlled process, less stressful for the yeast and winemaker. “Clean” (non-stressed) fermentations are a particularly helpful complement to the process that we term “reductive élevage,” central to the style of the Language of Yes.

“This reductive élevage protects the “fruit” and freshness of a wine as it ages, as well as allows for the formation of earthy complexing notes. Minimization of oxygen ingress is generally accomplished through substantial lees retention (they’re oxygen scavengers), infrequent (or no) racking, more frequent barrel topping and the utilization of larger and less porous storage vessels.”

Those paragraphs were taken from Grahm’s written thoughts, which Matt now tries to interpret in layman’s terms as we taste.

Here we have touches of bramble, but it’s a very subtle nose. Like a great poem or novel, it requires a bit of work. You need to search before it all makes sense. Peach and blueberries. A hint of cream teas. Then: spice, cloves perhaps. Superlative balance, supple tannins.

According to Grahm, “Grenache is said by some to resemble Pinot Noir, in so far as its need for gentle extraction and susceptibility to oxidation; the variety does not have the “density” of more structured varieties such as Cabernet Sauvignon, thus any edges or flaws (such as astringency or bitterness) tend to stand out in greater relief.”

No way can you put this down and leave it; you need to keep going back to it.

A blend of 87% Syrah and 13% Viognier, this has lovely purple colour, black fruits to the Grenache’s red fruits. Balsamic vinegar. Liquorice and flowers, resembling, though not slavishly, the Rhone. Beautiful weight in the mouth. Again, it is so subtle it washes over you like a soft turquoise-coloured wave on a Caribbean beach. Soft and sensuous. And yet there is the power of the thoroughbred there, too.

By the end of just three wines, I am reeling. I can only hope we can secure some of this stock. When I was lucky enough to import Jean-Francois Coche-Dury’s Burgundies into the UK, I always used to get a sense of his wines being elevated or lifted. Like angels sitting on clouds and gazing serenely down at the mortals. I get this impression again. But – and here’s the thing – these wines are so sublime that they are beyond my words. Some wines are great. Some wines are outstanding. Some winds are beyond my comprehension.

What I do know is this: from this day onwards I will be counting down the days until I can taste these masterpieces again