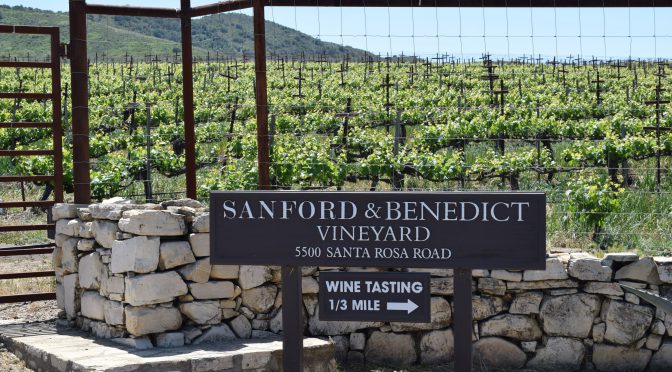 Balance is sometimes defined as a condition in which different elements are equal or in the correct proportion. In art, “balance refers to the use of artistic elements such as line, texture, colour, and form in a way that renders visual stability” (Eli Anapur). In motor racing the balance of the car is measured to the milligram. Listen to Hamilton: “Something is wrong. The balance doesn’t feel right.”

I am musing on this as I sip another perfectly balanced Sanford Pinot Noir. A wine is said to have good balance when all the different components – alcohol, acidity, tannin, sweetness – are working in harmony. For me, if a wine tastes beautiful but I cannot really single out any particular element which makes it so, then I will write “perfectly balanced” in my tasting notes. And if I’m feeling a bit artsy then “equilibrium” will also appear.

But to get back to the gig – and those Sanford Pinots. Yup, in terms of wine, we are visiting Californian royalty. Before we reach the winery I ask Steve to pull over so I can photograph the sign: “Sanford & Benedict Vineyard.” I stand and stare for a moment. This very spot is where the now world-famous Santa Rita Hills area was “invented” in 1971. Looking for the best location to perfectly ripen grapes, botanist Michael Benedict, working with his friend Richard Sanford, toured the cool coastal regions of California, eventually deciding on a part of the Santa Ynez Valley in Santa Barbara County.  The first vines were planted in 1971, and soon the Pinot Noir from this remote vineyard created a buzz. Others soon followed, and the original Sanford & Benedict Vineyard formed the backbone of what is now the Sta. Rita Hills AVA. It has been named one of the five most important and iconic vineyards in California by Wine Enthusiast.

In 1997, La Rinconada Vineyard was planted next door. It was to this vineyard that the affable and gregarious Trey Fletcher, chief winemaker at Sanford, took us when we first arrived. Home to 20 vineyard blocks and 12 clones, La Rinconada is primarily Pinot Noir. Trey jumps out of the jeep and we bend down to look at the soil. The lower portion of La Rinconada is a sandy loam, which transitions to more clay loam mixed with diatomaceous earth and shale on the hills closer to Sanford & Benedict.

We climb towards that vineyard, climbing, climbing. Again, we jump out of the jeep. “Notice the difference,” says Trey. Here, there is more calcium rich clay soils with shale and chert- a result of the sloughing off of the top half of the mountain ten thousand years ago. “Also, look at the vines – they were planted on their own root stock. Phylloxera really has never been an issue here.” Also in the jeep with us is Chuck Cramer, the guy who represents Sanford in the UK. Looking more and more like a character from an Elmore Leonard movie, Chuck is very Californian. Extremely so. Very much. Never stops. Chuck is such a common American name. Think: Chuck Berry, Chuck Norris, Chuck Connors. But as a northern England lad, Chuck for me will always mean Coronation Street. “Oh, ‘eck, Chuck…” (As a Shakespeare enthusiast I’ve never been able to get my head around Othello’s request to Desdemona: “Pray chuck, come hither.” Where did that come from?)

We climb to the top of the hill, to the original winery barn which looks drop dead gorgeous. It gives amazing views over both vineyards down towards the winery. And everywhere is the breeze. It is the east-west orientation of the Santa Ynez Valley which provides a pathway to the Pacific Ocean and its maritime cooling influence, allowing cool air to be drawn inland. Later we will see the fog which is common in these parts.

Back at the winery we are joined by associate winemaker Laura Roach. Here, Trey shows us something neither Steve nor I have seen in any other winery – a series of “elevators” containing four tanks which are installed on hydraulic lifts within the winery tower. Trey explains that this unique gravity flow system allows him to gently move the wine from tank to barrel or bottle without pumping and agitating the wine. We step into one of the tanks and the lift takes us up to the roof. It is like something out of Dr No. Back down in the cellar, the tasting is a sublime experience. The 2020 Pinot – just about to land in our warehouse – is a beautiful expression of red and black cherries, so soft and supple.

A 2019 S&B Block 6 has a feel of strawberry liquorice about it, and ever such a hint of salt. Or am I imagining it?

A 2019 Dominio Del Falcon (what a name!) feels as though it has a touch more alcohol. But only a touch. Balanced by just a hint more acidity. It is in perfect balance. There’s that word again.

Pinot Noir is so damned difficult to get right. Over the years it has probably caused me more disappointment and frustration than any other grape. Sometimes it can be thin, but more often the major issue is that the wines can often appear over ripe, even gloopy. But here every one of them is textbook – beautiful examples of what that grape can achieve.

On to the Chardonnays. The 2018 has a lovely ice cream sundae feel to it, lovely balance of fruit and acidity.

A 2019 Long Rows Block Chardonnay has a Meursault-type character to it, a touch of creaminess.

A 2019 Founders Vines Chardonnay has “more satin and less merino wool,” according to Trey. Not gonna argue with that.

Note: “gonna” rather than “going to.” Rubs off on you, this place.