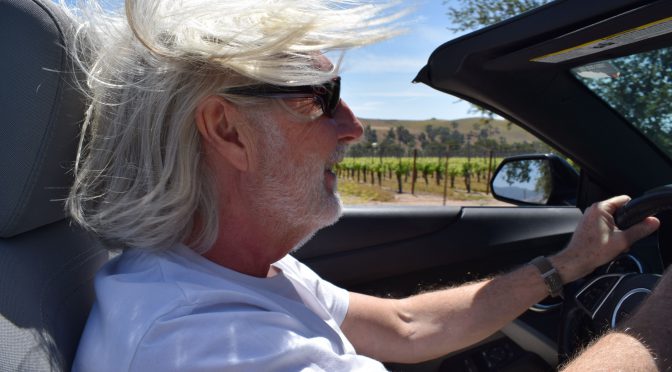 “So. California. Welcome. We’ve been expecting you.”

Back on the road again after two years of COVID lockdown – how exciting is this! – and one of our first trips is a belter. Our California list has not been updated for some time, and Steve and I are here to put that right. Like a couple of schoolkids.

First port of call after negotiating LA’s freeways is with Andrew Murray at his Foxen Canyon Road winery near Los Olivos.

If you were looking at someone who represents the very opposite of the admittedly clichéd and out-of-date notion that California is all about blockbuster Cabernets and heavy Chardonnays, then this is your guy. Andrew fell in love with Rhône varieties like Syrah and Viognier in the late 1980’s while traveling through France. Leaving his UC Berkeley palaeontology studies behind, he pursued his new mistress, Syrah, with an internship in Australia. Returning to the States, he founded his eponymous Santa Ynez winery and vineyard in Santa Barbara County, which reminded him of the Rhône Valley. His film-set style winery looks almost too gorgeous to be true. He explains it used to be an art gallery and points to the space where an Andy Warhol exhibit was once hung. In the very same space he now produces his own masterpieces.

We taste a Riesling from a series of wines on tap which has proved tremendously popular with the public. God, this is scintillating – my first California wine on this trip and I definitely hadn’t expected this!

But he surprises me with one of his first comments. “Actually, while I really love the reds of the Rhone Valley, I’m often not that keen on their whites.” He finds some of the whites from the Rhone – especially involving Roussanne – a little heavy, and now gravitates towards Chablis and Meursault because “they are so bright.”

And it is that expression which comes back to me time and again as we taste his whites – “so bright.”

“What I do is to try to take white Rhone varietals and put my own stamp on them,” he explains. “I’m a neophyte in that respect.” An Enchanté blend of Roussanne and Grenache from 2020 defines his point. It has the haunting and ethereal character you often get in that type of blend – but it also has a wonderful strip of minerality and zing. He bring out some of his E11even series of wines, including a 2020 Sauvignon Blanc which is sub-branded Unplugged. I am surprised that he got away with this branding and mention the Unplugged series of albums. “That’s what inspired me to take up guitar playing,” I volunteer. “I can do a version of Layla.” But thankfully Andrew – and Steve – look singularly unimpressed. On the other hand, Steve is impressed with the wine: “It’s not often I say I really like California Sauvignon Banc – but I really like this wine.”

“I’m not looking for typicity; I’m looking for atypicity.” I wonder for a second if Andrew has invented a new word.

He describes one of the flavours in his Esperance Rose 2021 as watermelon rind, which morphs into a nod towards Harry Styles’ Watermelon Sugar, at which we all nod knowingly, like guys do.

Now we move onto the reds.

An Espérance 2019 (Grenache, Syrah, Mourvedre) has an incredible dandelion and burdock nose and on the palate is an inky mouthful of blackcurrants and blackberries.

An E11even Cabernet Franc 2019 is described by Andrew as “not so much bell pepper as roasted pepper.” Wow! Hints of rhubarb and nettles and sherbert. A cracking wine. An Etranger 2019 (Mourvedre, Grenache, Syrah) is highly perfumed, masses of yellow plums, strident, edgy. Andrew explains the name. “I am a fan of Albert Camus and was a moody existentialist when I was young.”

Thankfully, he appears to have grown out of it, I think, as we finish the tasting.

What a tasting. Too many wines to describe fully here. What a start to our trip.

But then tiredness takes over. It’s great to be back on the road again – but, crikey, we are so out of practice!