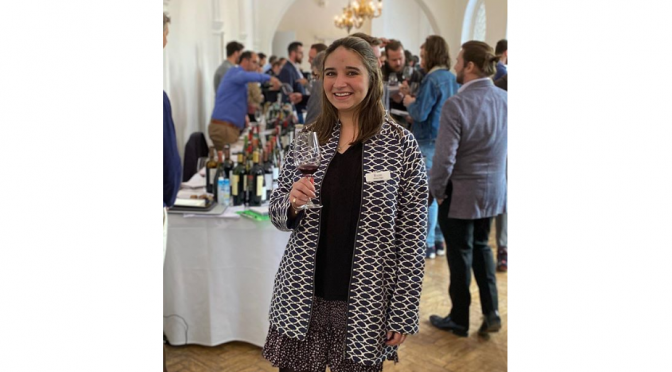 As part of Hallgarten’s Head Start Apprenticeship scheme, inaugural recruit, Amica Zago, has just finished her spell with the marketing team before embarking on a vintage in the South of France. Reflecting on her time in the team, Amica has learnt a lot about the marketing function in the business, from PR and communications, to events and awards.

The Head Start scheme is an 18 month long programme to develop the future talent of the wine industry, providing a 360-degree perspective of the wine sector from vineyard to table.

After the three amazing months in the Customer Service Team, I moved over to join the Marketing Department in January and have been working and learning alongside various sub-teams including communications, buying, events and brand management.

During my time in Marketing I had many interesting jobs and tasks to undertake on a daily basis. One of these included writing five blog pieces which have been published on the HN Wines Blog, including an article on Lebanese wines and one on sweet wines.

I was also responsible for writing our internal communications keeping the team updated on wines that had recently featured in press publications. Something I personally found exciting was reading the press releases I had written featured on Harpers Wine and Spirit news website on Hallgarten’s signing of contracts with both Goodwood and Ascot Racecourse, and Hallgarten’s impressive WSET course pass rates.

I was also tasked with several larger projects to work on throughout my secondment. My major project was evaluating press coverage and the influence it has on our trade customers’ purchasing habits. For this project I researched various publications containing mentions of wines from Hallgarten, breaking these down to regional and national newspapers, trade publications and articles sourced from events. Then looking at each individual write-up and seeing if there were spikes in sales after the publications. From doing this, I learnt so much about the world of PR and media, and how a recommendation or comment really can influence purchasing habits. Another area of the Marketing Department I got to experience first-hand is events. While in the team I was able to attend and assist the team in many events including tastings organised by wine bodies, the Annual Tasting and Minerality: Steve Daniel in Conversation with Dr Jamie Goode, the latter of which was live broadcast on Instagram. At the Hallgarten Annual Tasting I had the role of mentoring the Plumpton College students who were pouring at various producer tables. While at the tasting I also had a recorded conversation with Peter Richards MW about the Head Start Apprenticeship which has been included in Peter Richards’ podcast; Wait, wine can be a career?! (well worth a listen!).

Now, my next adventure as the Hallgarten Head Start Apprentice is taking me to France for the whole of September to work and experience the harvest at Château de Campuget, an exciting producer sitting on the border of three great wine regions – Southern Rhône, Provence and Languedoc.