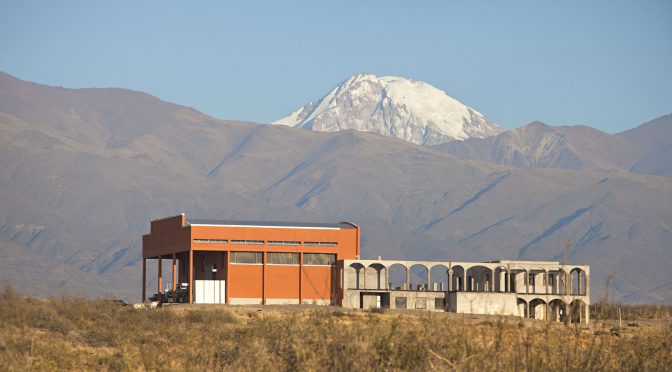 Hallgarten head of buying, Steve Daniel, recently put pen to paper to recount his first experience of Argentina as well as looking at what the future may hold.

My first visit to Argentina was in the mid-90s. I had been travelling to neighbouring Chile since 1988, had seen their wineries evolve and Santiago transform from a rundown city with no night life into a dynamic, modern international power house with incredible restaurants and bars.

When I finally took the short hop across the Andes to Mendoza and landed in a rural, sprawling agricultural area of around 1 million people it was like stepping back into the 70s! The cars were ancient rust buckets, the town was very run-down and – for a vegetarian (no big juicy steaks for me) – the food was truly awful.

The one hotel that was deemed suitable for foreigners was The Aconcagua which reminded me of a very cheap youth hostel I had stayed in in Greece during my time as a backpacker. It had the noisiest most inefficient air-con I had ever encountered, and was one of the most uncomfortable stays I have ever endured.

Thankfully I was there to taste the wine and not rate the hotels. The red wines were old fashioned and heavy. Nobody talked about the whites, which was not surprising as they were completely oxidised and totally undrinkable when you did encounter one.

Most of the wines were produced in vineyards on the hot, flatlands around the city. The most common way of training was still an ancient Italian pergola system, which was all about getting as large of a yield as possible, and the wineries were old and not very clean!

However, the one thing that struck me was the vibrant energy of the people. They had an amazing spirit, and despite what their government inflicted on them, they embraced life and were still amazingly positive and joyful.

It is this spirit and ‘can-do’ attitude that was the driving-force that revolutionised their wine industry in the following years. The winemakers still have to deal with hyperinflation and a struggling economy, but they have managed to deal with everything their government has thrown at them and emerged triumphant.

So where is the Argentinean wine industry now?

The vineyards have spread from the flatlands around Mendoza to the foothills of the Andes, where the combination of altitude and latitude plays a fundamental role in the resulting wine. The cool, high vineyards of Tupungato, where Andeluna are situated and Juampi Michelini utilises his egg fermenters at Zorzal, and La Consulta are producing amazing fragrant white wines fully of verve and zip, and red wines of balance and class. Cafayate and Salta in the far north, where we work with Piattelli Vineyards, are some of the highest vineyards on the planet are making beautiful vibrant wines.

In the far cold south of Patagonia ancient vineyards have been resurrected and new ones planted. It is from this lesser-known of Argentina’s winemaking regions that Matías Riccitelli produces his ‘Old Vines From Patagonia’ range which have received critical acclaim since their launch.

In the vineyards, some of the old Pergola vines still exist but yields have been reduced and large areas planted using Guyot. The wineries are now state-of-the-art and chock full of stainless steel, computer-controlled and temperature-controlled winemaking gadgets. Gone is the one size fits all approach, each winery also has rows of barrique and new larger formats barrels, as well as concrete fermenters – including the in-vogue concrete eggs.

They are as well-equipped as anywhere on earth, but again, the thing that makes the difference are still the people. Argentinean winemakers can now make squeaky clean wines on an industrial scale if they want, but what really excites them is expressing themselves. These guys and girls love to push the boundaries of what is possible. Argentine Malbec has turned from an unknown 15 years ago into the darling of the wine consumer, and is the go-to for steak and a ‘must have’ on all restaurant lists, but Argentina has so much more to offer! It is a huge mistake to think that Argentina is a one-trick pony.

The high altitude vineyards of Argentina are growing some of the best quality Bordeaux grapes in the world. In my opinion, Cabernet Franc and Cabernet Sauvignon from these high vineyards can more than rival anything from Bordeaux or the swanky Napa Valley, and at far more attractive prices.

The fragrant Torrontes is the perfect match with Japanese food. The Chardonnays have real depth and class and the best Sauvignon Blanc has a rapier-like intensity that are more than a match for Sancerre. The country’s high altitude vineyards are producing some of the most exciting wines on the world stage – something that was almost unimaginable during my first trip to the country 25 years ago. Oh, and as an aside, Mendoza has also transformed. There are amazing hotels to stay in and the food is amazing (even for a vegetarian). I would now thoroughly recommend a stay there!