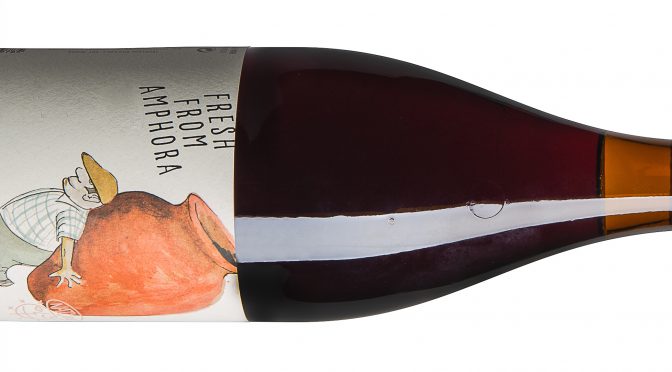 A star of the show at our recent Minerality: Steve Daniel, in conversation with Jamie Goode discussion, Herdade do Rocim, Rocim’ Fresh from Amphora- Nat’ Cool’, Alentejo 2018 is made from organically grown grapes; 70% of the vineyard is certified and the remaining 30% is in conversion. The grapes – Moreto 40%, Tinta Grossa 30%, Trincadeira 30% – come from very old vineyards, which are made up of only ancient, native varieties. Can you taste the minerality?

Aromas of fresh red fruits are complemented by earthy and savoury notes with a light and balanced palate.

Herdade do Rocim is an estate located between Vidigueira and Cuba, in the Lower Alentejo. It comprises 120 hectares, 70 of which are made up of vineyards and 10 hectares of olive trees. Since its inception in 2000, Herdade do Rocim has invested heavily in the vineyards, replanting vines and introducing new varieties. They are pioneers in ‘amphora wines’, following the ancient traditions of vinification in pots known as ‘Tahla’. The vineyard is cultivated manually and minimal intervention is used in the cellar, to produce fresh, elegant and mineral wines. In 2018, Herdade do Rocim was awarded Best Wine Producer by Revista de Vinhos.

Naturally vinified without any additions or must corrections. The fruit was carefully selected in order to vinify only the highest quality berries. Fermentation took place with indigenous yeasts in traditional clay amphora pots known as ‘Tahla’. The process took place without any intervention, including temperature control. The wine was aged for three months with skin contact which imparted complex aromas and flavours, resulting in this distinctive wine. This wine may create a natural deposit.