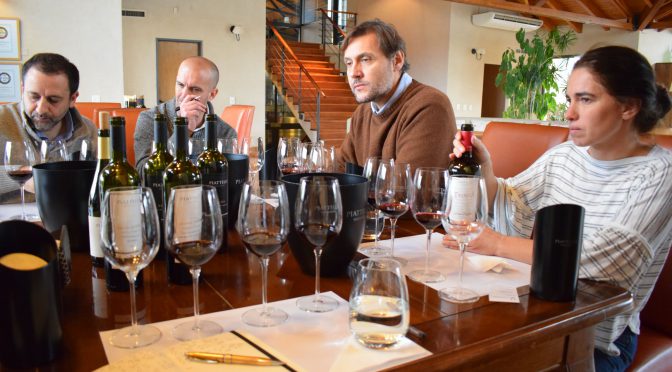 I had forgotten just how much I love Mendoza. Like Stellenbosch and Adelaide, this is a wine town. At eleven o’clock on a cold Sunday night the Plaza Independencia is heaving with promenading families. and there looks to be a restaurant/wine bar for every human being.

And there appears to be a supermodel wannabee on every corner.

Yup, welcome back to Mendoza.

We started working with Piattelli four or five years ago, principally because they offered us wines from Cafayate, from altitudes of 1,700 metres above sea level (these are still the highest-altitude wines on our list). However, at our first meeting we also fell in love with their Mendoza wines, and we took some smaller parcels from there, too. The Finance team raised their eyebrows… I had wanted to go back to Cafayate, but the logistics were too tight, so instead I am driving down to Agrelo in Luján de Cuyo to meet with winemakers Valeria Antolin and Alejandro Nesman. Valeria looks after the Mendoza operation; Alejandro the Cafayate. It is an interesting contrast to sit between them as I taste. Alejandro is a cuddly bear of a man who cannot keep still while he is talking ninety-to-the-dozen; Valeria has a more subtle feline presence.

The contrast here is between the more mineral Cafayate wines and the full, rich, though still gorgeously subtle Mendoza wines.

The Mendoza grapes are grown in two vineyards; around the winery in Luján de Cuyo, and in the Uco Valley, 20 miles further south in Tupungato at 4,000 feet above sea level (and from where the grapes which go into the Premium and Grand Reserve Cabernet Sauvignon and Premium Chardonnay wines come). The vineyards are USDA certified organic as there is no need for pesticides in an area which is pest-free due to the low humidity and high altitudes. The good news for us is that from the 2017 vintage they moved everything into Diam, because Valeria was worried about the different evolutionary rates of the wines. Like virtually every winemaker I meet these days, they are moving away from new oak to old oak for their wines.

The highlights from Mendoza: This is not the first time I have been in an Argentine tasting where the Cabernet has outperformed the Malbec, and I may be odd in that sense!

Alejandro takes centre stage and we begin with the two fruit driven value wines, the Alto Molino Torrontes and Malbec. Both are generous and seem to outperform their category with the Torrontes in particular showing an elegance and a subtlety which I often fail to detect in this grape.

Alejandro explains that Cafayate receives a lot of sun due to the high altitude, but the nights are very cold. These diurnal extremes mean that they have a very long growing season which allows for a balanced and ripe structure in the grapes by harvest. Highlights:

During the tasting there is constant friendly interplay between the two winemakers. It’s fascinating to sit between them and listen to urbane and super-friendly Alejandro face off with the lovely and softly spoken – but I wouldn’t mess with her – Valeria.

The winemakers are then keen to show me their newbies and experiments. Loscano is a new range which aspires to a feminine feel both in looks and taste, and allows Valeria and Alejandro to play around with blends. The highlight is a red blend which has lovely young fruit, and is a beautiful combination of fruit and acidity. It’s been a great tasting, conducted by two very enthusiastic winemakers and which also included Marcelo Farmache, the General Manager, Santiago Acosta, the Marketing Manager, and Luis Mohammad, who looks after us. They are a very warm and genuine team and over a huge asado lunch (and they keep refreshing my plate!) we drink some of the rarities in the Limited Edition range, including a stunning 2016 Chardonnay which screams Burgundy.

Then – unbelievably – they take me to a flash hotel for afternoon tea to make me feel at home! (I can’t remember ever taking afternoon tea at home in Romford). But I’m so full from lunch that I cannot do it justice. As we are waiting for the car to be brought back round, we listen to the hotel’s piped music, which is all British. This takes me back a couple of days to when I was sitting in a burger joint in downtown Santiago, a place which had no obvious connection to the UK, but in which I watched Man City playing Watford in the FA Cup Final on three television screens on mute, while listening to an endless stream of British pop music (British, not American!) A reminder of one of the things at which we are still world class.

To walk off the asado I stroll through the Parque General San Martin in the cool autumnal sunshine and make my way up to the Estadio Malvinas Argentinas, where I relive the memory that all of Scotland hold dear: that of Archie Gemmill slaloming his way through the Dutch defence in the 68th minute on June 11th 1978 to score one of the greatest goals in World Cup history “…and Scotland are in dreamland!…”

Yup, welcome back to Mendoza!

For more information on any wines from Piattelli Vineayrds, please speak to your account manager.