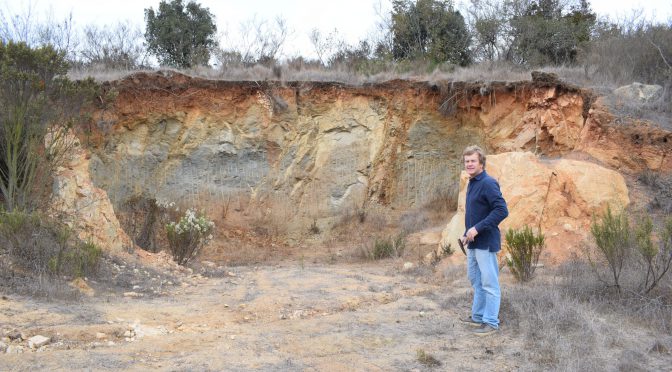 When I was cutting my teeth with Viña Santa Rita, I used to come to Chile quite a bit, and in those days in the early part of this century every winemaker was on the lookout for the next new area. I remember how excited I was on my first visit to Casablanca, when I was told that this was the new nirvana.

But now Casablanca – while making excellent wines – has been superseded by cooler climate areas. And here I am – lucky chap – in one such area: Leyda. And while there are lots of plantings at Leyda, there are only two wineries. And one of them is Viña Ventolera.

I am driven there (maniacally!) by the well-travelled Stefano Gandolini, whom I have known for many years, especially from his time at Argentina’s Doña Paula. Stefano accepts that he is very lucky with his latest role. Working for a rich industrialist, he can afford not to cut corners. Of their 160 hectares of vines, 80% of are sold. “I only keep the very best.”

When we step out of car, you can smell (or at least sense) the sea, a mere seven miles away. The salt is borne on the wind (Ventolera means windy in Spanish.) And this influence of the famous Humboldt current is part of the reason for this area’s success. Apart from being very cool, the other main advantage of Leyda is its wonderful sub-soil. Stefano takes me to his soil pit which allows us a spectacular look at twenty-five feet of sub-soils: sandy clay, clay, chalk. He points out that you can have different sub-soils even within one vineyard. Later, driving through the vines, he says: “These two rows here I will keep, the rest of the vineyard I will sell.” The ultimate in vineyard selection! The winery does not look ostentatiously expensive, but every part of its design has been carefully thought out during its design. The winery is set in a recess, so everything is gravity fed from the moment the grapes arrive. The temperature is controlled partly by opening large window panels. A batch of Syrah grapes begin their long walk towards fermentation. It will be a long walk here: Stefano likes a long slow fermentation at low temperatures (the cladding around the tank is almost frozen) and these guys will be in the tank for around two months.

He shows me something I have never seen anywhere on my travels: 225-litre stainless steel barrels sitting alongside the more usual oak versions. “Gives you the benefit of lees contact but without the oak influence.” We sit down to a vertical tasting of Ventolera Sauvignon Blancs, from 2013 through 2018. You hardly ever get the chance to do this.

We move on to Stefano’s top Sauvignon, the Cerro Alegre Limited Edition Sauvignon Blanc 2016, of which 2,700 bottles were produced. These are from the best two blocks. Stefano uses no free-run juice, but uses the middle pressing of the grapes “as you can get more flavour there.” It has an intensity which is almost painful in the mouth, before dissolving into a slightly rounder, satisfying richness.

Stefano then conducts an interesting experiment. He shows me the 2013 Private Cuvee Chardonnay and the Reserve Cuvee of the same vintage, which are both essentially from the same grapes but the Private is matured in his stainless steel  barrels, while the Reserve goes into French oak. I am stunned by the intensity of both, but I prefer the slightly more oxidative, funky Private version. It reminds me of a fifteen-year-old Puligny Montrachet. Stefano is delighted. “Exactly what I wanted to be told.” But it is an amazing tasting and we linger for twenty minutes over these two bottles.

After tasting the 2016 Ventolera Pinot Noir – lovely young clean expressive Pinot – we move to the Private Cuvee 2016. This has such amazing denseness of nose and expressive fruit. As with the Chardonnay version, this sees no oak. “You are tasting just terroir here,” says Stefano. Reeling, I turn towards the Claro de Luna Pinot 2015, named after Beethoven’s party piece. This comes from a small four-hectare vineyard and is aged in French oak. “A sommelier came from France and he was looking for the best Pinot in Chile. He found all three here.” We are now in Gevrey territory.

But no matter how great these wines are, Stefano tells me he thinks this is THE place for Syrah. “It has a style completely different to any other Syrah in Chile.” The 2017 vintage he pours for me alerts the senses. This is rasping, ravishing raspberry Syrah. Wow! You tend to become less of a buyer and more of a punter in these instances – but we have got to have this wine.

Later, sitting in a trendy bar in Santiago’s hipster Bellavista region, listening with some alarm to a bossa nova version of Don’t Look Back in Anger (what would Liam say?), I reflect that I need to come back to Chile more often. I am in danger of not being able to keep up Stefano and the other great winemakers I’ve met on this trip. I must put this right – just as the DJ morphs into a version of the Police’s Every Little Thing she Does is Magic.

For more information on any wines from Viña Ventolera, please speak to your account manager.