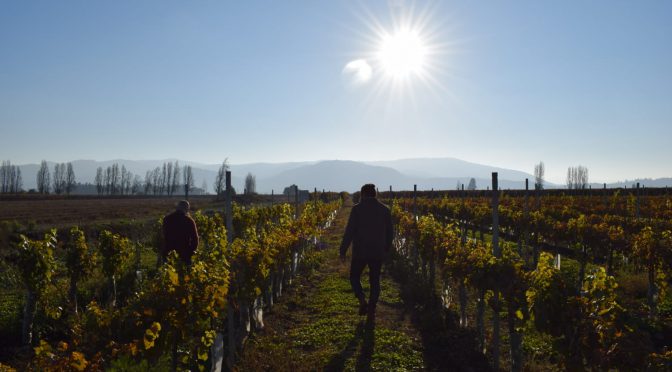 My first trip to Chile for a few years (I used to travel here three or four times a year in the first decade of this century) and this is the first time I’ve managed to get here in one flight, having previously always changed en route: good start!

Interesting conversation on the plane before take-off between the cabin crew and a musician sitting in front of me. He had paid for his cello to be on the seat next to him instead of going in the hold, and there was a ten-minute discussion in which the crew told him that they’d “been boning up on the airline health and safety instructions and they state that the cello must be placed with the fat part of the body on top…”

The good start is dampened somewhat by one of the longest immigration queues I’ve seen in ages, but the frustration dissipates when you get into the chilly ice clear Santiago morning and are soon careering down Avenida Libertador General Bernardo O’Higgins (still amuses me).

I then spend some time in a bar watching the highlights the final day of the Premiership and chuckle at a tweet which says that the Wolves supporters are celebrating non-existent Brighton goals to mess with the Liverpool supporters’ heads.

Then Roberto Echeverria arrives with a bear hug and we begin the three hour journey to the estate at Molina in the Curico region. The Echeverrias are one of our longest-standing partners, and as we walk through the gallery in the beautiful hacienda house, Roberto shows me the ancient wind-up wall-mounted telephone from which his father took the call from Peter Hallgarten late one night in 1993 to tell him that Hallgarten was about to place its first order. Some of the faces are familiar, but as we enter the winery I meet one who isn’t: Victor Ribera, a Valencia-born winemaker who bears an uncanny resemblance to Nacho Varga in Better Call Saul and who has worked at the winery for the last five years. It is Victor who does the jumping around among the barrels to draw samples, while Roberto – who married Julia, one of our sales executives a few years ago and who obviously enjoys her cooking – watches on with a patriarch’s nodding approval.

We begin with the tanks and taste a selection of Sauvignon Blancs and Chardonnays from the home estate – the Chardonnay (clone 76) which will go into the Unwooded Chardonnay Reserva already has a splash of Viognier which gives it a big dollop of richness.

We then try another Chardonnay which has a fabulous nose of vanilla chocolate and orange peel, and Roberto sees my eyebrow lift quizzically. “This will be one of our Natural wines,” he tells me. “So fermentation is much slower and it hasn’t yet gone through malo.” “I didn’t know you made Natural wines,” I admit. Roberto grins. “This is what I wanted to show you.” He tells me that he originally made a very small batch for their Canadian importer, Steven Campbell,  and then sold a parcel to New York which sold out in a week. Any orange type wine is snapped up immediately by the Big Apple! This is my first visit since the huge earthquake in 2010. I remember at the time Roberto sending me videos and photos of the massive damage to the winery, with tanks split and massive structural damage. Now he shows me a tank with what looks like a huge scar along one side. “After we’d sorted out all the insurance, we had these broken tanks sitting here, so we pulled them apart and put them together.”

I love wineries. I love tasting the raw fruit. I often want to say: “But don’t bother with ageing for a year; just bottle now.” In the past that has usually been met with the winemaker rolling his eyes at my enthusiasm or stupidity. But now Roberto tells me this is what they are doing. “We are removing the juice from the skins much faster and we are toning down the amount we put in barrel. We are trying to get the wines out fresher than we used to.” We taste ravishingly young Cabernet Franc, piercing Merlot, and then heart-stopping Cabernet Sauvignon. Victor laughs at my spitting, some of which misses the spittoon and some of which dribbles down my chin. A confession: after 30 years in the trade (which I’ll celebrate in August), I have still not mastered the art of spitting. I have a colleague who can hit a target from fifteen feet and make a spittoon sing at impact, but I’m more of a gobber than a spitter.

One of the Cabernets has so far been treated as a Natural wine – no sulphur, wild yeast fermentation – but Roberto tells me that not all will be bottled as Natural and some will go into the conventional blends. But this Cabernet has such steeliness and verve. “Previously we would have used barrels to soften the tannins; now we’re looking to soften the fruit tannins during fermentation to remove that need,” explains Roberto.

We go to a dark corner of the winery where Victor carries out his experiments. “We hide them here so no-one can shift them accidentally!” Some of these barrels contain the wines which have been part of a project which Roberto has made with Steven Campbell and winemaker Thomas Bachelder, using fruit from Litueche on the Colchagua coast. The wines are destined to be bottled under the RST label. We taste a Cabernet Sauvignon inoculated with a Tuscan yeast – “My baby,” says Victor. I am shown the Cabernet Sauvignon destined for the Family Reserve being pumped off the skins “earlier than in the past” and I then taste two separate juices from the pressed grapes, one of which has an incredible primitive stalkiness. We taste a Carignan and a Garnacha, so-named in honour of Victor. The Garnacha has a fabulous smokiness. “Only 300 dozen produced,” Roberto tells me. I tell him to let me know when he is going to release it. Then, an amazing Garnacha-Mourvedre blend. I am excited about this visit and, later, as we walk through the 80- hectare vineyard, and Roberto shows me where they are replanting with better clones, I find myself thinking back to that midnight phone call in 1993, and reflecting on how good it is that one of our longest-standing, and probably more traditional producers, is meeting today’s wine challenges. I must make sure Roberto sends me those experimental wines!

For more information on any wines from Viña Echeverria, please speak to your account manager.