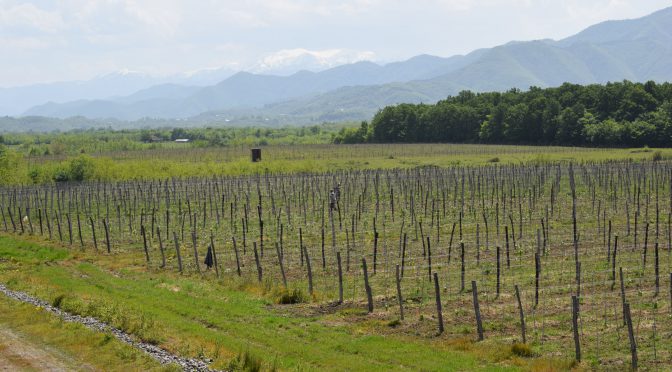 I had wanted to come to Georgia for a few years now, but after spending four agonising hours en route in a half-finished and desperately grey Kiev airport, I was beginning to have second thoughts. Thankfully, one flight later that all began to change and, as we drove in darkness from Tbilisi Airport, the neon lights of a city never appeared more welcoming. A slightly bonkers taxi driver added to the fun. Hearing we were from the UK, he decided to demonstrate his knowledge of London football teams.

“No, Not London. Birmingham. Sort of.”

We kept quiet and let him get on with it, and thankfully a few minutes later this nutter pulled up outside one of the old town’s evocative hotels, the kind you look at longingly as you drive down the street before realising with glee that this is the one you’re staying in.

It was midnight, but, thankfully, Tbilisi appears to be a city that rarely sleeps and we were able to grab a bite to eat. Next morning we were met nice and early by Vladimer Kublashvili, who sounds like a racing driver but who is the chief winemaker at Khareba. It takes around three hours to drive to one of Khareba’s wineries at Terjola in Imeriti in western Georgia (their other main winery is in the east in Kakheti.) We zoom past Josef Stalin’s birthplace of Gori (“most people keep quiet about it, but you do get some worshippers,” says Vladimer.)

It’s a slightly odd landscape. On the one hand you might be driving through Surrey; other times the view reminds me of the flat plains of northern Italy as you drive towards Verona from Brescia; turn a corner and you have an Alpine scene in front of you; the snow-capped mountains bring to mind Mendoza; and once you get north of Tbilisi, that dusty straight road could be the famed Dead Dog Highway of Chile’s past. And – making us feel at home – the flag of Saint George seems to be flying everywhere.

We visit three of their vineyards to look at Tsitska, Krakhuna, Tsolikouri and Otskhanuri Sapere. Khareba has too many white grapes so they are planning on distilling some into brandy, explains Vladimer. On the other hand, there is so much demand for Saperavi that they are planting another 200 hectares. The winery, renovated in 2011, is so clean you could eat your lunch off the floor. Here, they produce more than 40 premium still and sparkling wines, working with 20 indigenous grape varieties. Vladimer then shows us round the 900 square-metre ageing cellar equipped with French oak barrels.

And then we go to the hallowed Qvevri room. I get an odd sensation, a sense of wonderment. It is as if the values and traditions of the trade in which I have practiced for the last thirty years are being re-evaluated and reinvented before my very eyes. Gazing once more out at the vineyards, Vladimer says that they are investigating converting part of their production onto biodynamic wine. “We called in and expert and we asked how much he thought we should convert,” says Vladimer. “He replied: “Well, how much are you prepared to risk?””

We begin the tasting. As with a lot of Georgian wineries, they split their production between the traditional Qvevri wines and more modern, European style wines.

Of the European style wines, a 2018 Rkatsiteli (“Rick Astley” back in our tasting room) has a beautiful saline feel to it. You get a hint of the superb minerality of this grape without the extreme Qvevri overtones. This is Pinot Grigio with Attitude. The 2018 Krakhuna has a touch of the Campania about it to me, though Steve thinks Malagoussia, with a hint of grassiness complementing a richness on the palate. The real star of the modern whites, however, is a 2018 Mtsvane, a nuclear grape with a powerful nose of ginger and coriander, yet stunningly light on the palate. Of the Qvevri whites, a 2017 Tsitska has an amazing mouthfeel, “like sucking water through a bed of silt,” says Vladimer, an challenging description which somehow does the wine justice. But the best Qvevri wine is a 2014 Rkatsiteli, with masses of quince – funky doesn’t even come close. Of the reds, we’re talking Saperavi, Sapervi, Saperavi! The first (2018) is a gorgeous, rasping mouthful of cheery cherry fruit, exactly what a Beaujolais should be. Higher up, the grape becomes more complex and more savoury. A mid-range version from the Mukuzani region is an epic wine and reminds me of Malbec in its silkiness, and also of a Lancelotta, that dark coloured Emilia Romagna grape which goes into Lambrusco and which used to be sent up to Burgundy to add colour.

The Qvevri reds are equally as shocking as the whites. A rare 2013 Otskhanuri Sapere (there are only 20 hectares in the whole of Georgia) has an amazing nose, with salami and orange peel, and lasts forever in the mouth. An Aladusturi has wet, earthy tones with loads of green vegetables. A 2018 vintage, the tannins are still young and rasping, but it will develop superbly. We end with another fabulous 2015 Saperavi, with liquorice, eucalyptus and bay leaves. It has a very “grapey” feel and has soft tannins.

What a tasting! I reflect later, as we eat dinner at the g. vino wine bar in the old town’s vibrant Erekle Street, listening to an old hippie murder a series of early 70s British rock classics, throwing in some Led Zeppelin, Pink Floyd and Deep Purple. With its stunning mix of Byzantine, Neoclassical, Art Nouveau, Beaux-Arts and Middle Eastern architecture, Tbilisi is a beautiful city. And with an amazing nightlife, it may be the next go-to stag destination – but it deserves better than that.

This could be just the end of another buying trip. But, oddly, it feels much more than that. This is a centuries–old country which feels incredibly young (at least the capital does). They unashamedly celebrate their traditions but are incredibly inquisitive about western culture. They have put up with repeated Russian incursions and come out of the other end smiling.

I’ve rather fallen in love with Georgia.

Mind you, I cannot get out of my head the thought that there is some demented taxi driver raging at the night: “Chel-SEA! Arsen-AL! Ful-HAM! Vumbledon! West Ham UNITVED! West Brom-WICH Alvion!”