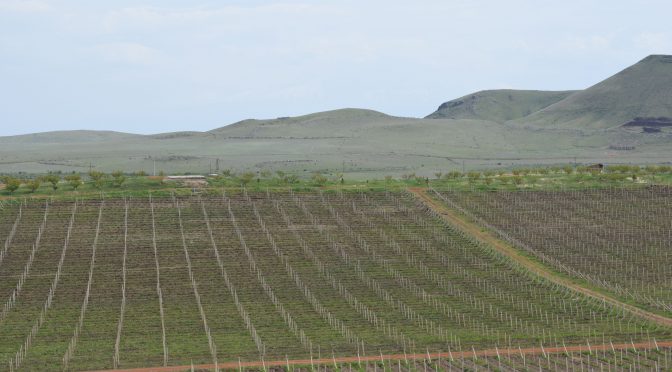 Until very recently, if you’d asked me about Armenia, I’d have had to have thought fairly long and hard. Religion? High priests, pointy hats, long beards? Maybe I would recall some vague memory from the history classroom of the Armenian genocide of 1915. Oh, and the Kardashians, of course. After that…

But step forward Victoria Aslanian, owner of the ArmAs winery. “These are only some of the things Armenians have invented,” she states indignantly. “Colour TV; single pour faucets; MRI machines; the MIG jet; bendy straws; ice cream cones; car transmissions. And did you know, Armenians make up thirty per cent of all Moscow-Los Angles Aeroflot flights.”

You learn very quickly not to mess with Victoria. Choosing the main course for dinner, she senses our hesitancy. “Ah, decisions, decisions,” she says. “Like when you first use your tongue. Should you go right or left?” She had greeted us on our arrival at our Yerevan hotel with: “I’ve had a bottle of wine sent up to your rooms. And some dried fruit. Later I will send up the girls.” This is one sassy lady.

And don’t even try arguing with her about whether Georgia or Armenia came first in the winemaking stakes. “We were first. Six thousand years ago. Actually, probably a bit longer.”

We had driven from Tbilisi to Yerevan. It takes six hours but seems to last forever. The scenery in southern Georgia is drab, but when you pass into Armenia, via a very dreary Eastern European border crossing that brings to mind John le Carré – and with a Major Toilet Blockage Issue – you are suddenly in the land of snow-capped mountains, switchback roads and grip-the-armrests drama. And round every corner the potential to glimpse Ararat.

It is hard not to be enchanted by Yerevan, apparently one of the world’s oldest continuously inhabited cities, but now with a vibrant pavement cafe culture, full of youth and heady promise. At eight in the evening the streets swarm with promenading families, and, later (this city stays open very late), students chat noisily in the endless wine bars on Teryan Street.

The following day we take the 40 minute journey to the ArmAs winery. It was founded in 2007 by Victoria’s father, Armenak Aslanian. There are 180 hectares lying 1880 meters above sea level, 30 layers of soils, and over 300 days of sunshine per year. “Look, it’s volcanic soil,” she says, running it through her fingers. “It has limestone and calcium carbonate.” Winemaker Emilio Del Medico is not present, so Victoria conducts the tasting. Of the two whites we try (Kangun and Voskehat), it is the Voskehat that is looking much the better, with a 2016 showing huge perfume and elderflowers on the nose, and a rich, lyrical intensity on the mouth. There’s a touch of the Gruner Veltliner about it.

But it is the reds which are the real stars. Areni is Armenia’s best known variety and may be, according to Wine Grapes, a cross between a Sangiovese and a Pinot Noir. The 2012 vintage has a lovely nose, lots of dark fruits and mulberries, and a beautiful silky mouthfeel. The Reserve version has extra oomph, is raisiny and more alcoholic. I prefer the basic. However, for me it is the Karmrahyut which is the best grape we taste. The 2014 has incredible perfume, rose petals and violets, and is soft and easy drinking, like a really great Beaujolais. Meanwhile, the 2013 Reserve is another beast altogether, with voluptuous and dark plummy fruits, and hints of pomegranates. The Karmrahyut is an unusual grape in that the juice is red, rather than clear. Victoria has used this uniqueness to make a rose wine, by having only one hour of skin contact. The result is a beautifully light red wine with masses of soft berry fruit. Later we sit on the veranda before dinner, hoping for a glimpse of Mount Ararat, but, alas, it is cloudy. Victoria is still in full flow. She tells us that Armenia has an incredibly patriotic diaspora. “It’s amazing the amount of Armenians who have been displaced and who come back at every opportunity. I am biased, but I think we are one of the proudest countries in the world.”

It’s hard not to disagree. Over the years this country has suffered at the hands of Turkey and Azerbaijan, and remains (along with Georgia) an island of Christianity surrounded by Muslim countries. You have to feel a natural affinity for it – even before you taste the amazing array of grapes they produce.

Plucky is the word I am looking for.