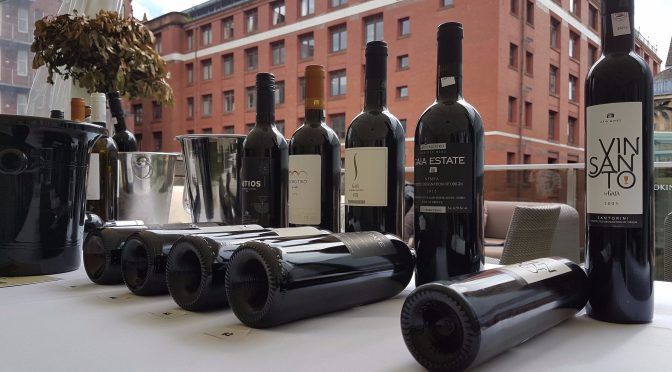 At the start of June we went on a tour of the UK with the unique flavours of many indigenous varietals from countries on the shores of the Med – the South of France, the Maremma, Southern Italy and the islands of Sardinia and Sicily including wines from the more marginal Mount Etna. From the more exotic and adventurous Eastern Mediterranean, we will showcase wines from Croatia, Greece, Cyprus, Turkey and Lebanon, countries which have emerged on to the UK wine scene over the last decade. The Roadshow stopped off in Bristol, London, Birmingham and finally Edinburgh.

Justin Keay, writing for The Buyer visited us in London to taste through the range of wines and below is what he thought…

Under the direction of its head of buying, Steve Daniel, has been steadily building up its Mediterranean wine portfolio collecting together wineries from the Lebanon, Occitanie, Italy, Turkey, Cyprus and Croatia. But it was the wines from Greece that Justin Keay was particularly enamoured with.

UK wine supplier, Hallgarten, thinks small is beautiful, and they’re right. When it comes to the  Mediterranean, the smaller wineries in its portfolio are producing world class wines that also deliver outstanding value for money.

Last September, Hallgarten took its South African wines and winemakers out on the road, hosting a series of tastings that showed how far the Rainbow Nation’s wine industry has come in recent years. Recently it’s been the turn of Hallgarten’s impressive Mediterranean portfolio – four tastings, four days, but made worthwhile by the sheer quality of what was on show.

Less can be more, I said to myself, noting that in just 95 wines and 11 tables Hallgarten had wrapped up much of what is currently interesting in winemaking in the Mediterranean.

So what were the stand-out wines?

Starting with the eastern Mediterranean, Lebanon’s Château Ksara – located in the Bekaa Valley, adjacent to Syria – was showing 10 wines, all pretty good by any standard. The reds, for those who like their Bordeaux blends, are well made and quite serious although it was the Cuvée 3eme Millenaire 2013, (a blend of 40% Petit Verdot, 30% Syrah and 30% Cabernet Franc) that really impressed. This was full-on cassis fruit intensity, good balanced oak (14 months in barrel), and still very much in its youth.

The stars here, though, were the whites, specifically the Chardonnay 2014 and the fresh, fruity Blanc de Blanc 2016, a blend of 55% Sauvignon, Semillon and Chardonnay. This last wine, which spends several months in French barrique has a wonderful, light oak mouth feel. Very moreish.

At the next table, Turkey’s Kayra Wines showed its continuing renaissance under chief winemaker, Californian Daniel O’Donnell. His high end reds Buzbag Reserve 2013 and Versus Okuzgozu 2014, are both excellent, with the latter a full-bodied, rich wine that could still do with a few more years until it reaches its best.

The entry level white, however, Buzbag Emir-Narince 2015 proved that O’Donnell’s work has truly permeated through even the lower end of the Kayra range. Refreshing, just 12% ABV, but lovely fruit on the palate.

Hallgarten had also pulled out its excellent Gerard Bertrand range, some wonderful Italian wines, two wines from Croatia’s Kozlović winery (including a distinctive, quite bitter Teran from the variety that makes the ultimate ‘Marmite wine’), and from Cyprus Kyperounda‘s Petritis 2016 a wonderful 100% Xynesteri that has understandably become a bestseller on that eastern Mediterranean island.

The Greek wines were the centrepiece

However, for me it was the three tables featuring the crop of Hallgarten’s  Greek range that were the centrepiece of this tasting, and especially the whites, which were almost uniformally highly accessible, despite most being made from indigenous varieties of which I’d never heard. Most were also lowish in alcohol, being typically around 12.5%.

“These wines have been really well received even in parts of the country you wouldn’t necessarily expect, because they are approachable and work well with and without food. We had one restaurateur who put a Gaia white as one of his house wines and he’s amazed how well its selling, even better than his Kiwi Sauvignon Blanc,” says Steve Daniel, Hallgarten’s head of buying, who says the growing interest in a healthy Mediterranean diet has also boosted interest. First off were three whites from the Idaia Winery in Crete, which produces some 240,000 bottles a year mostly from local varieties. On offer here was the Idaia Gi Vilana 2016 (£10.75); the Vidiano 2016 (£11.57) and the Ocean Thrapshathiri (£11.24), all made 100% from their respective grapes. All interesting, for me the clear winner here was the Thrapshathiri, a delicate, fresh wine with lovely herbal aromas, and a clear crisp finish.

From the Peloponnese, a winery that is a virtual shrine to near extinct grapes, the wines of the beautiful Monemvasia Estate – which produces less than 200,000 bottles a year – were at the other end of the scale taste-wise, and no less interesting for that.

The 100% Kidonitsa White PGI Laconia 2015 is made from one of the grapes used in making Greek Malmsey, which originally hailed from Monemvasia and was first made

here by monks back in the Middle Ages. This had a wonderful quince taste on the middle palate but a fresh finish, and was quite unlike the more full-bodied Asproudi White PGI Peloponnese 2015, which has benefited from barrel ageing and time on the lees. My favourite of this batch.

Moving swiftly on, to northern Greece and Macedonia, the wines from Ktima Gerovassiliou were quite exceptional. All of them. This winery – founded by Vangelis Gerovassiliou – is best known as having almost single handedly revived the Malagousia variety which almost disappeared in the 1970s – which generally produces well-rounded and aromatic wines that age well but are also very fresh and accessible when drunk young.

The best example here was the Malagousia PGI Epanomi 2016 (£13.55) a full and generous wine that has benefited from being part (20%) fermented in oak. Yet Ktima Gerovassiliou – which now produces 400,000 bottles with plans to increase up to 500,000 – is no one trick pony; its award-winning single varietal range were all pretty good (including a Sauvignon Blanc that spent six months in oak, and a Chardonnay, seven months) but the award-winning Viognier PGI Epanomi 2016 (£14.45) was quite exceptional – lightly oaked, with lots of peach and apricot on the palate, and of generous body. The reds are also good but needed more time, especially the still overly acidic Avaton PGI Epanomi 2013, an interesting blend of Limnio, Mavrotragano and Mavrudi.

And of course, Gaia, whose wines have long been favourites of mine. Yiannis Paraskevopoulos, chief winemaker of this pioneering producer (which makes wines on Santorini and in Nemea in the Peloponnese) was modest when I asked what makes them so special.

“When you have such fantastic raw materials – old vines, rich soil, wonderful weather – it is not so difficult to make such distinctive wines,” says Yiannis.

He’s being far too modest, of course, as one sip of his Thalassitis Assyrtiko PDO Santorini 2016 (£17.26) confirms. Made from very old vines, this is an amazingly full and saline wine, unsurprising because the vines are apparently regularly sprayed with sea salt, but also zesty and fruit forward. This is a superb wine with a remarkable sense of place, as is the Wild Ferment Assyrtiko 2016 (£19.36) made from grapes grown at higher elevation and partly fermented in oak casks. Of the reds, the Gaia S. Agiorgitko Syrah PDO Nemea 2015 (£17.15) was the most memorable, fermented and aged in oak for 14 months, and checking in at 15%, though this is already so well-balanced that you really don’t notice it.

To finish? Gaia’s remarkable Vin Santo 2005 was the most moreish wine of the tasting, a deliciously irresistible blend of Assyrtiko, Aidani and Athiri from Santorini. Nectar of the Gods indeed. 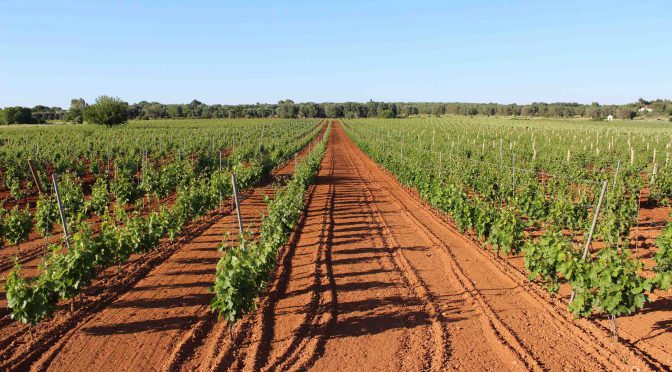 The buying team has recently spent some time tasting the new 2016 vintages of many of our Greek and Italian wines. Wow – this looks like it has been a brilliant vintage (especially for whites). I cannot remember the last time I got so excited about Italy – and Steve has gone into raptures when looking at both countries.

“I am thrilled to say that 2016 ranks as one of the greatest white wine vintages I have seen,” Steve Daniel says.

In order to whet your appetites, here are some tasting notes from the team:

“Greek wines get better every year I taste them as the winemakers continue to improve and further understand their vineyards, but without doubt the 2016 vintage is something truly special. The year was a cool one by Greek standards and the white wines are amazing. Both Yiannis at Gaia Wines and Vangelis at Ktima Gerovassiliou state the whites from 2016 are the greatest wines they have made to date. All producers report the same quality.

“The wines combine power, perfume and finesse. I expect to see a flurry of awards  and high marks from Parker etc.  in the coming months.”

“Colomba Bianca was launched last year on the 2015 vintage and the acceptance of the wines was universal and the wines have been great. In the 2016 vintage the wines have taken a quantum leap in quality. The wines are rich and aromatic at the same time, and have incredible length and complexity for the price points.

“Ca’Rugate has been winning Tre Bicchieri awards for their Soaves

for years and are one of the top estates in the region. The 2015s were excellent examples but once again the 2016 whites are at another level.”

San Silvestro, Cortese del Piemonte DOC ‘Adelasia’  2016
“I was completely blown away by the quality of this wine. This year the wine has amazing fruit and intensity and it really is a Gavi buster. The best vintage I have seen of this wine. As a fantastic alternative to Chablis, there has never been a better time to drink this kind of intense, mineral-driven wines.”

Colomba Bianca, Grillo ‘Vitese’ 2016
“Lovely clean rich and spicy nose – a wine which begs you to taste! White peaches and black pepper on the palate. Looks good and tastes great!”

San Silvestro, Cortese del Piemonte DOC ‘Adelasia’  2016
“Like Steve, I found this wine stunning. I have to admit I’ve never

really been a fan, but this was drinking quite beautifully. Huge depth of fruit, hay and flowers on the palate, wonderful balance on the finish. Better by far than a number of Gavis’.”

Get in touch with your Account Manager to try these wines and if any knock your socks off, let us know!

Summer is almost upon us and so it’s time to crack out the nectar of summer – rosé. To celebrate the start of the warmer months, our Wine of the Month is a 100% Primitivo wine from San Marzano.

Made from the Primitivo grape, this is a very appealing pale and tangy rosé with aromas of roses and wild strawberries against a creamy background of Mediterranean spice.

In 1962, 19 vine growers from San Marzano, whose families had farmed the land for generations, combined their efforts to establish ‘Cantine San Marzano’. Through the decades this cooperative has grown significantly, attracting over 1200 vine growers, using modern and technologically advanced vinification techniques to produce elegant wines, while paying homage to the ancient Apulian wine traditions. Nowadays, the fusion of time honoured tradition

and passion, with contemporary techniques, enables this winery to produce wines with distinctive varietal and regional characteristics, which distinctly reflect the local terroir.

A skin contact maceration took place for several hours, followed by a partial drawing off the must. Fermentation took place in temperature controlled stainless steel tanks, preserving the aromatics and the fruit characteristics of the Primitivo variety. Ageing then continued in stainless steel to retain the freshness. This is a very modern wine, made from the Primitivo grape variety, which is an uncommon characteristic for a Salento wine.

A softly coloured rosé with intense aromas of wild cherries and raspberries, combined with an attractive hint of Mediterranean maquis -the local aromatic shrubland. Elegantly styled and slightly off-dry, with a refreshing finish.