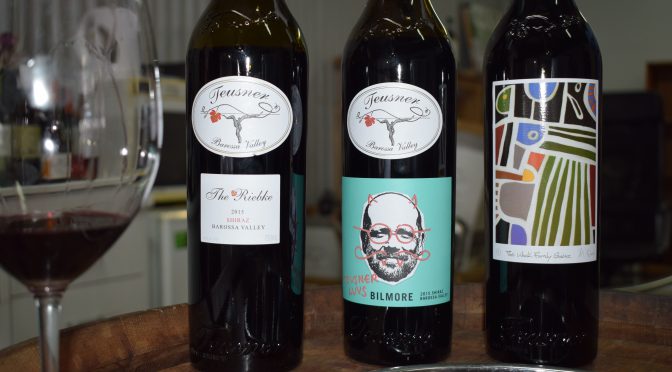 The drive up to the Barossa always takes longer than I bargain for and I am running late. Luckily, Kym Teusner is as laid-back as they come. Which is just as well, because the winery that Teusner bought before the last vintage still has not been finished and there are builders everywhere putting the final touches to the new fermenters, ready for the new vintage in a couple of weeks. “We had to do it,” Kym explains laconically. “We needed to double our crush.” They will do 40,000 cases this year. It is an imposing sight: dozens of glinting tanks of all sizes, capable of holding anywhere between 1,000 litres to 150,000 litres. “All batches are fermented separately, that’s a bit of a creed for us.” We are joined by Kym’s sales and marketing guy, Ben Shillito, who explains that in Australia they have three different labels: Round Two, an indie retailer wine, uses fruit from their own single vineyard in the Angaston foothills; Teusner is the main brand, all the fruit coming from generational grower vineyards, in some cases going on to 8 generations of the same family on the property; then Hutton Vale is a small parcel joint venture between the Teusners and the Angas family, premium vineyard owners.

Even their bought-in fruit comes from growers with whom they have long-term relationships. “Some of them sold to the big wineries, but after GFC, a lot of the big boys let them down. And then the same thing happened with the terrible 2011 vintage. We stuck with them. We still bought fruit from that vintage.”

I nod my head. But GFC? What is that? Some new vineyard disease, a technical term in the winery? “Global Financial Crisis,” explains Kym.

Since we started working with our new Australian wineries, I’ve thought that Teusner offers the greatest commercial possibilities; they are a reasonably sized Barossa operation whose labels do look off-trade driven. I am not disabused as we settle down to a large tasting overlooking what Kym calls the building site. The Woodside Sauvignon Blanc 2016 (with 4% of Barossa semillon) has a touch of sweetness about it and is well rounded for a sauvignon. Very commercial and appealing.

The Empress Riesling 2016 is sourced from the Eden valley and is a lovely open fruity wine. Kym explains that Eden Valley rieslings tend to have more floral notes than the flintier rieslings of Clare.

The Gabrielle 2011 Barossa Valley Semillon moves Kym to raptures. “I love and adore semillon. I think the Barossa does this better than anyone. I know the Hunter Valley boys like their own semillon, but this definitely gives them a run for their money.” This is their Coco Chanel wine. Kym explains: “Coco Chanel once said ‘Fashion changes – style endures’ which I think says it all about Barossa Valley Semillon. And as everyone knows, Coco’s real first name was Gabrielle.” I didn’t know that, but what I do know is that this wine does has fabulous style, with a great honeyed biscuit nose and a fleshiness in the mouth.

The Salsa Rose Rosé 2016 is made of Grenache and Mataro with a touch of Montepulciano (the previous vintage also had Carignan.) This is all barrel-fermented, picked sparingly in the vineyard and pressed straight into oak. It is a really funky wine. “This is the only wine which we don’t inoculate. Some goes through malo, some doesn’t. My aim here is to have you wanting another glass.” It has a hugely attractive gamey, meaty flavour to it – unlike any other rosé.

Kym and Ben then line up three shiraz wines and I get clicking with the camera. The Riebke family, led by Steve Riebke, based in and around Ebenezer, are still their most important growers. The eponymous wine shows great commercial, plummy, rich fruit. You can see why it is the best seller. The Teusner Billmore Shiraz 2015, sourced from the western Barossa around Gomersal, is softer and sweeter and more extreme than the Riebke. “This is more what the public expect of the Barossa,” says Kym. Finally, the Wark Family Shiraz 2015 is sourced from a Stonewell vineyard just at the back of the winery and shows really soft fruit and beautifully integrated tannins.

“This is how I’d classify them,” says Kym. “ The Riebke is a firm wine and comes from light soil; the Bilmore has chocolate flavours and comes from brick red soil; the Wark has a ferrous iron nose, with coal, tannins and structure.”

The Albert 2015 Old Vines Shiraz (from two vineyards in Ebenezer and Williamstown, some of the vines of which are 70 years old) shows intense menthol and eucalyptus, but Kym says there are no eucalyptus trees for miles, so thinks it must be a combination of clones and soil type. It is a massive wine and needs time.

The Gentleman Cabernet Sauvignon is sourced: 80% Eden Valley, 20% Barossa and has a lovely mint and herbaceous nose and a chocolate feel in the mouth. “The problem here is that some Barossa growers try to make the cabernet too much like shiraz, but cabernet is a completely different animal, and should at its best show good herbaceous fruit.” The Righteous Mataro has masses of sweet fruit with a lovely soft oakiness to it and will be around forever. “I’m very keen on mataro. This wine is absolutely the best we can do with this grape in the whole of Barossa.” They get the grapes from Marananga.

The Righteous FG Shiraz has intense black fruits, plums, dark chocolate and warm spices. It more than lives up to its name!

The Hutton Vale wines are the result of a joint venture between Kym and the Angas family, who own some prime vineyard plots in the Eden Valley.

The Hutton Vale Grenache Mataro from 65 year-old vines smells of dried herbs, has the softest and silkiest mouthfeel and stays on the palate forever.

The Hutton Vale Shiraz 2013 (the previous vintage got a 98 from Halliday) has a massive and intense dark cherries and rich raspberries on the palate. A huge wine.

The Hutton Vale Cabernet 2013 has very soft fruit (which seems to be a characteristic of the Hutton Vale wines.) It has classic cedar box nuances – so obviously a very good wine.

Then we come to the two wines which started everything – the Joshua and Avatar – “the daddies of the place” states Kym.

The Joshua (2015) comes from 100 year old Grenache vines which make up 65% of the blend and sees no oak. I’m a huge fan of old Grenache and this is a beautiful wine, with that delicious  damson nose. The Avatar 2014 is made up of 50% Grenache and spends 18 months in oak. As you’d expect, this is more dense and heavy, with a touch of tar.

We need to pack up the tasting rather sharpish, as Kym and Ben need to catch a plane for Brisbane. “But no worries, mate, make yerself at home, take a look around,” say Kym.

Later, as I am driving home, have Kym’s quotes ringing in my ears and I am reminded of the last wine we tasted: the Independent Shiraz Mataro 2015, which had strong tar and liquorice flavours and a touch of herbals. “We really work this wine, I like to try and layer the flavours, but there is always a core of fruit there. The thing about working with shiraz on its own is that it gives instant gratification.” The last phrase made me laugh. The wine was named – presumably – after Kym Teusner: a man independent of mind.