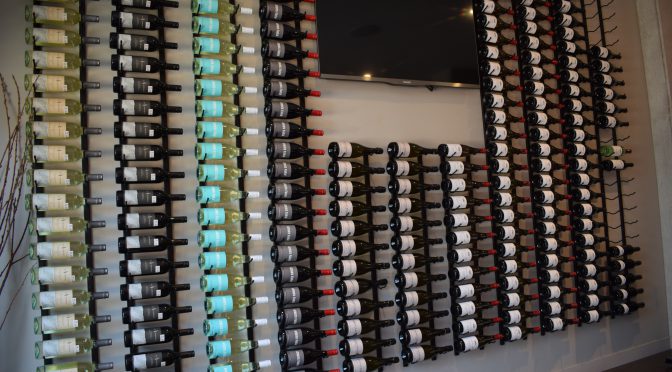 This one was different!

Instead of the usual meeting in a winery or a Cellar Door or even the middle of a vineyard, my meeting with Fox Gordon took place in their boutique office on King William Road just south of Adelaide’s CBD. But you can tell what they are about as soon as you walk in: the office/showroom is beautifully “decorated” with bottles of their various brands. It is an arresting and ravishing site – a whole wall covered in horizontally-laid spotless virgin bottles. I immediately get out the camera and start snapping.

Sam and Rachel Atkins (nee Fox) are an attractive, open couple. They ask me what I would like to do: visit their winery, have lunch… But I’m quite happy to have a chat in their offices and drink the excellent Flat White from a stylish-looking coffee shop next door. (Though given how stylishly they are dressed, I feel a little sordid in my trainers and jeans, having spent the morning tramping through vineyards; very kindly, they affect not to notice, and their charming and typically open Aussie hospitality rather bowls me over). Ra (short for Rachel and pronounced Rar) tells me about their network of nine growers in the Adelaide Hills, the wine being made at a 14,000-tonne winery at Project Wines, which is almost on the border with Langhorne Creek. Sam then takes over to tell me that they are going to pull out of the Barossa Valley. It doesn’t suit their style; the Barossa is viewed as being traditional and the birthplace of huge, big ink buster wines, in contrast to Fox Gordon’s image and the style of their wines. The Adelaide Hills, which is where they will concentrate, is viewed as producing cool climate and cool-looking wine.

But this is not to say that this is a boutique operation in terms of size. This year they will make 40,000 cases, are present in the heavyweight Australian retailers, and have had wines listed in Matthew Jukes’ 100 Great Australian Wines for many years. Sam cut his teeth when working for BRL Hardy and introduced container after container into the UK supermarket trade in the late 90s. In addition to that, Ra has twice been nominated for the Australian Women in Wine Award, run by the London branch of Wine Australia, and during the time I was there she let me know that she hoped to be nominated again for 2017; there is substance as well as style.

The one potential fly in the ointment is the recent departure of well-known winemaker Tash Mooney. According to Sam, it was a natural parting of the ways. “Tash very much her own person and wanted to do her own thing and we had been together for a long time. And there’s no getting away from the fact that was a little uncomfortable with our marketing approach and its emphasis on viewing what we do in a wider context – a lifestyle creation.” They are confident that their new winemaker, Marty O’Flaherty, winemaker for 15 years, will produce the goods.

I was fascinated by their choice of grapes with which to work, such as pinot grigio, fiano, tempranillo and nero d’avola. Sam’s eyes light up and he tells me of their relationship with an Italian, Caj Amadio , now in his 80s but who acts as if he is still in his 30s and whose family owns a vineyard in the northern part of the Adelaide Hills. “We just spent  great weekend with Caj and Jenny on Kangaroo Island, tasting both our wines and his vineyard remains a benchmark in terms of quality and a bedrock in terms of a source of European varietals,” commented Sam. “He’s one of the most amazing men you’ll ever come across,” says Ra. Montepulciano and nebbiolo are on their way, as well as a Fume Blanc style.

Not unexpectedly, they see internet sales and social media marketing as becoming more and more vital, and their POS and other marketing support materials are state-of-the-art and owe something to the approach of fashion houses. But you cannot beat old style distribution: during our meeting Ra took a call to say that Benares, arguably London’s finest Indian restaurant, had started listing their wines. Deep joy all round.

You leave the meeting enthused by Sam and Ra’s vitality, creativity and joie-de-vivre.

PS: to give an idea of the quality of the wines, I am attaching below my tasting notes from a recent Aussie tasting we did at London’s Langan’s restaurant…

Princess Fiano 2015
Caused quite a stir when we showed it – great spice, a ballsy textured number with nutmeg and grapefruit. Great alternative to Campania.