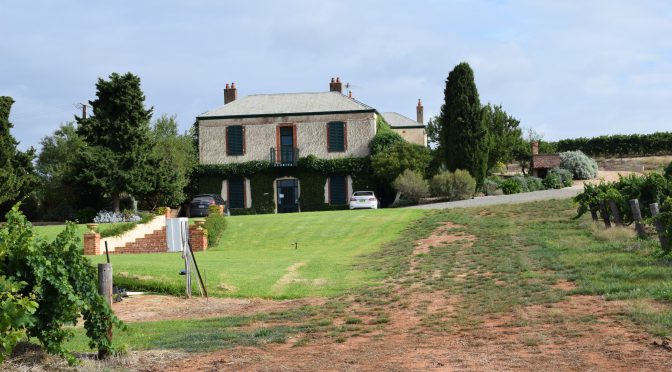 Sam Barry is examining the berries in his clos Clare vineyard. It is a few weeks before vintage and everything is looking good. Last week they had four consecutive days of over 40 degrees which had cleared away any potential for botrytis – thankfully, it looks like they not be suffering like they did in 2011.

We make our way up and down the vines. They grapes are still tight. I am struck by the vegetation around the vines; there is vigorous growth and extensive canopies. Sam tells me that there is a different management regime between those vines which face south (he doesn’t like any bunches to be exposed to the sun) and those which face north (he is quite happy for those bunches to see the sun). This 30-hectare Florita site is one of the most historic and famous vineyards in all of Australia. It was here that the legendary Leo Buring first planted riesling. When Buring died in 1961 it passed through a number of hands, before it was purchased by Jim Barry in 1986. The vineyard was planted entirely with riesling – at a time when you couldn’t give riesling away.  Jim Barry must have been a perceptive chap. But even then, to make things pay, the Barry family had to asset-strip the vineyard and sell off chunks of it. With the renaissance of Riesling changing their fortunes, however, they were able to buy the plots back bit by bit and, finally, in 2008, they bought the last plot of two hectares, and Jim’s son, Peter, now running the business, gave it to his son, Sam, to run as clos Clare.

So how does it differ to the rest of the Jim Barry rieslings? Well, firstly, it is dry irrigated (able to be so because the clay soil in that part of the vineyard retain moisture better). This means that in very dry years the clos Clare wines tend to show better than the other Jim Barry rieslings.

And Sam explains, he is looking for a particularly linear style of wine. The overriding principle is to keep the fruit cool. “After picking, it is immediately put into a cold room to settle” (later he shows me at the winery the “cold rooms” – which are simply shipping reefers: ingenious.) “The moment the fruit become warm, that is when you have oxidative issues. It is then whole bunch pressed. We don’t want any solids in the tank. We want very very clean juice. We don’t want any phenolics from the skins. We ferment cool and for a long time – to get a clean linear type of style.

“I’m not particularly looking for complexity with clos Clare. I’m looking for freshness.”

He has a very interesting theory when it comes to ageing. He thinks that riesling is excellent from bottling to two years, then it goes through a closed stage and then makes in a re-appearance at around eight to nine years, when it really shows its beautiful mature fruit.

We walk up to the house, which is being refurbished into an attractive Cellar Door/Guest House, and Sam pours a glass of the 2016 clos Clare Riesling. Searing acidity (but not out of balance), penetrating lime and coconut flavours. Cool, very cool climate winemaking; wake-up-and-smell-the-roses wine.

Following the tasting, Sam gives me far too much of his time to show me round the Clare Valley, driving me up to the far north, pointing out all of the family vineyards. A highlight is the sight of the newly planted assyrtiko on the edge of the Lodge Hill vineyard – which will delight Steve! We then drive to the Armagh vineyard. “There it is,” he says, pointing to a very unprepossessing vineyard. Considering that it must rank with Henschke’s Hill of Grace as one of the two greatest Australian vineyards, it is a bit incongruous and, well, lacking in drama. But what fruit!

Sam points to an adjoining vineyard and tells me his is currently working this. Later, reflecting on the visit as I drive down towards Angaston, I make a mental note to keep an eye on that wine!