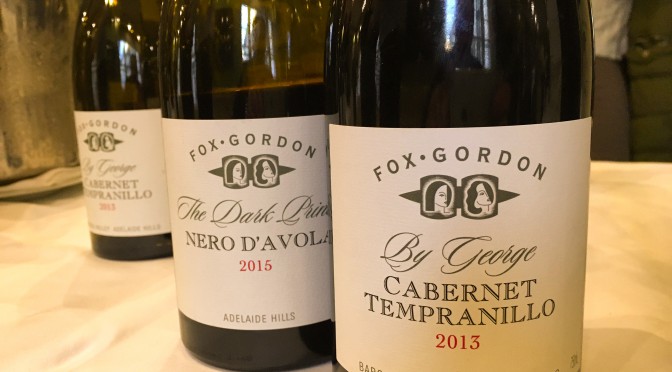 For me, it was depressing: and with a touch of deja-vu, because for the second time this year I went to bed quietly confident that we’d get the right result – only to wake up to find mayhem. At three a.m. things were a little tighter than we’d hoped and Florida was proving to be stubbornly resistant, but I was still confident Clinton would carry Pennsylvania. And surely Wisconsin, Ohio and North Carolina wouldn’t all vote for Trump? Would they?

Well, at least it was good to see their pollsters are every bit as useless as ours.

There is drizzly rain and a chilling wind in central London. But on the other hand I have the perfect antidote; Hallgarten’s tasting of our new Australian range at Mayfair’s wonderful Langan’s Brasserie.

It’s mid-afternoon by the time I arrive. Langan’s is iconic but always reassuring and thankfully I see the ground floor is packed out with lunchtime customers. Trump’s election doesn’t seem to have bothered them.

Upstairs in our tasting room, the first person I run into is Our Man in the South, Daniel O’Keefe, who is in raptures. “Marvellous wines, marvellous wines…” I point to Amelia Jukes: “All her work!” – Hallgarten has taken over most of the business that Amelia had built up through her Hallowed Ground Agency. And what an amazing job she has done. The wine-up in this room would knock most UK agency/distributors for six. There’s a refreshing bustle, some serious wine evaluation taking place, concentration. I nod at some of the faces dotted around the room. And then I join in.

Few wineries as young or as small as Canberra’s Eden Road have won so many prestigious awards – 45 awards in the last few years, including Australia’s most important, the Jimmy Watson, for its first vintage of The Long Road Shiraz in 2009. The key is the altitude; Eden Road Wines is situated in High Country (it’s cold up there!) as Managing partner Christopher Coffmann tells me. And, wow, the 2015 Skin Contact Pinot Gris Rose is a Grace Kelly of a wine – glacial elegance. Then it’s on to the 2011 Canberra Shiraz, which is looking magnificent – tar, coal, liquorice, vanilla.

Fox Gordon’s iconic E&E Black Pepper Shiraz won acclaim as the best red and best wine at the IWC a few years ago. We’ve got quite a wodge of their wines on show today. The 2015 Abby Viognier is a sumptuous and rich Viognier, enveloping your palate, throat passage and heart. I pause. There is a hum of concentration throughout the room. At these events there is normally a lot of chatter, old friends catching up. But here there seems to be a definite appreciation of the wines. To cushion the shock of Donald’s victory, I think, we should all try a glass or three of Fox Gordon’s Nero d’Avola 2015: wonderfully original.

Now, onto something more familiar. We’ve been working with Larry Cherubino for a few years now, but we’ve only just inherited his Laissez Faire wines via Hallowed Ground. These are Larry’s range of natural wines, the purest expression of natural winemaking made in small batches from hand-harvested grapes. Oh God! The 2015 Fiano is witheringly beautiful: charm, style and elegance in a glass. Still reeling, I move on to his 2015 Porongorup Pinot Noir, a cornucopia of bramble and dark forest fruits, gamey, mushroomy, a touch of the Little Red Riding Hood mystery (can’t think why, just keeps recurring in my mind as I taste.)

I have to move away now, have a chat with Amelia, who is five months pregnant and radiant. She must feel so proud exhibiting the fruits of her labour, so to speak. But she has to dash off to chat to another one of customers. So I crack on.

Langhorne Creek’s Lake Breeze was named Australia’s Champion Small Winery a few years back and – and this is becoming a familiar story – has achieved an extraordinary level of success in Australian Wine Shows, including 25 trophies and over 100 gold medals since 1994. And tasting the Bernoota Shiraz Cabernet 2012, it is easy to see why. This is an example of what Australia does best, exhibiting a magnificent generosity of fruit and spirit. If only politics was as smooth. ornington Peninsular, where we had been looking for a partner for some time. Ocean Eight’s Mike Aylward was named “Young Gun of Wine” in 2011 (some title, that!) And here we have a Hollywood of a Pinot (the Aylward 2012): definitely an Oscar winner, appropriate here at Langan’s, where the walls are adorned with film stars and other celebrities dining at the restaurant.

Meanwhile, no less a figure than James Halliday described the Paringa Estate as “One of the best, if not the best, wineries on the Peninsula”. The estate was founded in 1984 by teacher Lindsay McCall, when he purchased a derelict orchard in 1984 on Paringa Road. In 1996, Lindsay gave up teaching to focus entirely on Paringa Estate: 25 years on, Paringa Estate is one of the most highly awarded wineries in Australia, regularly winning gold trophies for their Shiraz, Pinot Noirs and Chardonnay. My God: the Paringa Estate Pinot Noir 2010 is a sublime wine. Gpd! This might be the star of the whole tasting.

Ravenswood Lane shows what you can do with the beautiful cool climate fruit from the Adelaide Hills. Marty Edwards follows a philosophy of minimal intervention, respect for organic principles and is committed to capturing the nuances of each site and variety. This is definitely true of the Sauvignon Semillon 2014. I am not the only one purring as I swish the wine around my mouth, coating my palate with peach and lemon. Great stuff!

Teusner Wines was created by Kym Teusner and Michael Page in 2001 – in order to save an old Grenache vineyard from being torn up! Teusner’s philosophy is to produce only exceptional, affordable wines by being very selective about the fruit that is sourced from old, well maintained vineyards. “We started small and rode the wave and this is where we’ve ended up. These are wines that we love to drink, we are not chasing markets,” says Kym Teusner. The Woodside Sauvignon 2014 is looking magnificent, open full and rich but also still with beautiful acidity.

Ulithorne Wines is located in the heart of the McLaren vale, in the area of Seaview on the northern side of the Onkaparinga River National Park. They have made some wines especially for Hallgartens, including the affordable Dona range. This is actually the first time I’ve tasted them as they are still on the water and Ryan Kinghorn has air-freighted these over to us. My Managing Director, Andrew Bewes, has already texted me to say the range is looking great. And he’s right! The star is the Dona Blanc 2016, a Marsanne, Viognier and Pinot Gris blend, which has those brilliant secondary characters that the Rhone Valley does so well. And that’s it. Wow – what a tasting. Time has flown by and now it’s time to leave. I leave Chris to tidy up and make my way back out into the London darkness. I’m now cooking, full of it, full of good Aussie spirit. I’m up for anything. Tonight I will be seeing Phyllida Lloyd’s production of Julius Caesar at Donmar’s tent at King’s Cross. I’m excited: the two other plays in the Donmar trilogy, all set in a women’s prison, were sensational (The Tempest might be the production of that play I’ve ever seen.) But how I wish I could take a bottle with me to drink during the play. What would I choose? Despite the weather, I’m warm as I make my way across Mayfair and up to Regent’s Street. Thinking of Australian wines, I cannot get that old Australia cricket song out of my head, the one they used to sing during the Packer era… Come on Aussie, Come On Come On, Come On Aussie, Come On…Da da da da da da da….What great days. And what great cricket. Thommo smashing the ball into Bumble Lloyd’s box…Ian Chappell’s moustache… Come on Aussie, Come On Come On, Come On Aussie, Come On…A helpless Colin Cowdrey, “Good morning” as he passes and incredulous Thomson on his way to the crease…Doug Walters smashing the last ball of the day for six at the WACA…Ah, those were the days. So what would it be? The Paringa Pinot? The Fox Gordon’s Nero d’Avola? Something from Larry…?

Come on Aussie, Come On Come On;

Come On Aussie, Come On