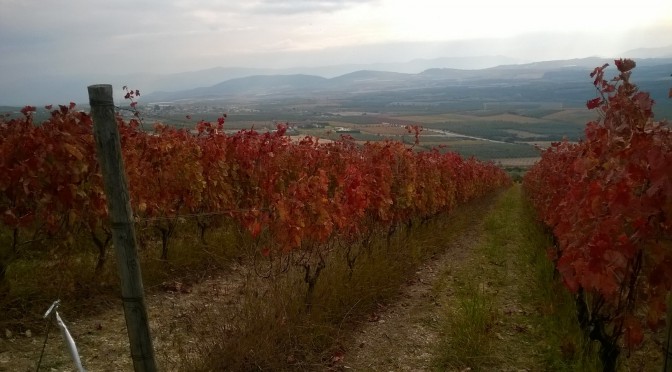 I am being driven at high speed – maniacal speed – by Dimitris Seitanidis. We’re on our way from Kavala to Drama (the modern-day spelling of Hydrama) to visit the Manolesakis Estate, whose wines we started importing earlier this year. Dimitris, it would appear, could also work as a tour guide as well as a wine exporter. Later he will take me on a hair-raising moonlight tour of Thessalonika, chock-full of his flowery accounts of the town’s history.

Drama has the reputation of producing the ripest grapes in Greece, explains Dimitris. “George Manolesakis came from Crete after the war. By the early 1980s, he was working for the local producer Nico Lazaridis. And then, in around 1998, he founded his own company. You’ll like George, he is a quiet man. Dignified.”

Worse, still, my mobile phone is playing up. But I’m determined not to faff around. Best not to make a Drama out of a crisis. I groan inwardly at my pun.

We pull up at a pleasant modern building on the outskirts of town. Compact, this is the winery from which 150,000 bottles are produced each year. I am greeted with polite restraint by George (whom you immediately warm to, as he has a wrinkled and mischievous face, and bears an uncanny resemblance to Barry Cryer). He and his winemaker, Angeliki Apostolakis, give me a guided tour of the small, meticulously clean winery which actually looks more like a large house with attached garage. An original garagiste.

And then in walks Stavros.

Stavros Manolesakis, George’s son and general manager. Stavros the Greek. Big bushy beard and moustache, open necked shirt, billowing black leather jacket, big bear hug. “A typical Crete guy,” whispers Dimitris. He is almost a parody, I think, as he rat-a-tat chatters with Dimitris. Later I find that this is a delightful chap, who in his spare time creates banquets for the villagers and who delights in cooking for any local wedding in the village. He shows me a photograph of him barbequing 140 kleftikos. He is frustrated that I have not chosen to stay with his family.

“Next time, you stay with me and I cook,” he states. This is not a question. I’m not going to mess with Stavros.

We jump in his BMW and he begins tearing through the vineyards, seemingly oblivious to the effect on the car’s undercarriage. Quite dramatic, I think. (I cannot get Drama out of my head – what a great name for a place.)

We screech to a halt.

Stavros proudly indicates the surrounding sea of vines. “Now we have 25 hectares. They are dotted around the village in small parcels, none more than three kilometres from the winery. All are hand-harvested.”

Stavros’s father originally planted western varietals such as Sauvignon Blanc, Cabernet Sauvignons, Merlot and (not an obvious choice, this) Ugni Blanc. It is only in the last five years that he and Stavros have begun serious plantings of indigenous varietals. This seems to be a common theme on my trip. Now the area is best known for Assyrtiko, Limnio, Roditis and Agiorgitiko. Angeliki explains that Drama’s continental climate, rich soil, and gentle slopes provide ideal conditions. The result is low yields per hectare and a low volume wine production.

Like the other producers on my visit, they are trying to buy other plots throughout the area, but the locals are not stupid and are holding out for higher prices.  “What can you do?” asks Stavros, as we climb back into the car and charge back to the winery, where Stavros directs us into the tasting room.

“Let the tasting begin,” he announces.

On the way back to the airport, I muse on my visit. In a world awash with Cabernet and Chardonnay, the 300-plus varieties of Greece – including Xinomavro, Assyrtiko, Agiorgitiko and the undoubted king, Malagousia – offer a wonderful point of difference. Steve was 20 years ahead of the rest of us, so we are all trying to catch up. The best way to convince yourself of this, of course, is to visit the estates on which they are produced, so with apologies for those great producers I haven’t visited on this trip – Gaia, Monemvasia and Idaia – here are my five picks from the trip: