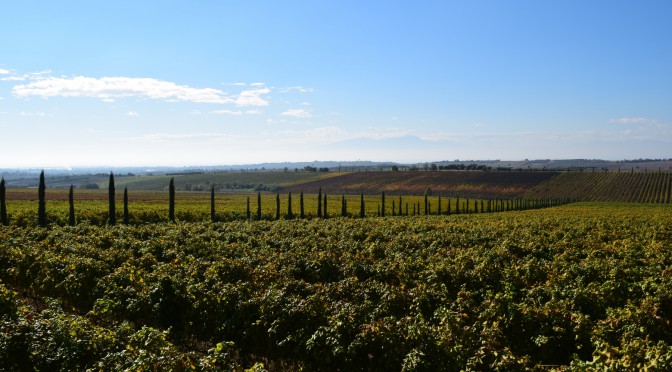 No matter how many times you do it, there’s always something disconcerting about being deposited by the late night budget airline into a small, unfamiliar European city. Bleary-eyed passengers shuffle unseeing through the dimly-lit concrete arrivals hall and emerge into a cold night, now blinking against the harsh light of the bus concourse. Thessaloniki is considered an open-air museum of Byzantine art, according to VisitGreece, but tonight it’s pitch dark and we’re hungry, and all we pray for is a taxi.

But there are times in your life when you’re really grateful to be a wine buyer, especially when you work with producers such as Evangelis Gerovassiliou – the Godfather of Malagousia – who has arranged for us to be picked up. Minutes after landing we are whisked off in a cab (how guilty you feel, looking back at the queues for the airport bus) that winds its way us through the industrial surrounds of the airport to an amazingly funky restaurant, Duck Private Cheffing (some name!) where Evangelis treats us to carpaccio of swordfish, eggs sprinkled with black truffles (brought into the restaurant by a mate of his who tells us they come from Mount Olympus!), grilled langoustine, lobster, grouper and seabass. And four desserts. Four.

I’m here on a long-awaited trip to visit some of our producers in northern Greece (and about time, too) and next morning, in the company of Imbibe’s Chris Losh, I am driving through the flat scrub hinterland of the city towards Amyndeo’s hazy, golden and tawny coloured hills which offer the promise of kind things.

Immediately upon arrival at Ktima Alpha, you feel at home. The winery is new, linear, cool, classy. The affable export manager, Kostas Arvanitakis – a touch of the Danny de Vito here – greets us expansively, takes our bags and whisks us away on a tour of the vineyards. The estate was founded in 1997 by the experienced viticulturist Makis Mavridis and chemist-oenologist Angelos Iatridis. The winery and the 105-hectare vineyards are situated midway between two huge lakes on land which was previously underwater. “Here they have found many fossils, including some mammoth fossils,” explains Kostas, as we watch two falcon hawks glide overhead.

The vineyards are in immaculate condition. Ktima Alpha was the first vineyard in Europe to install subsoil irrigation pipes – in 1995 – and now have 500 kilometres of them. “That would get you from London to Newcastle,” I helpfully explain to fellow northerner Chris.

“We have fifteen varietals in production, with another twelve on an experimental basis, “ says Kostas, pausing to show us the prized 93-year old xinomavro vineyards; the winery’s Xinomavro Reserve regularly tops the bill as the best Greek red in international competitions. “But still, I’d love to have a crack at Riesling.”

I tell him we’re more interested in indigenous varietals, but Kostas points out: “Yes, but blends are important to the consumer because they allow him to be introduced to obscure Greek varietals.”

Alpha is on a journey to increase awareness of Amyndeo, often in the shadows of its bigger cousin Naoussa down the road. Alpha are renting a satellite from the University of Athens to provide photographs to allow them to ascertain ripening potential. “We make our data available to the local winemakers. If we can help them, then we increase awareness of Amyndeo.” It seems to be working. Vineyard land is increasing in the region, in contrast to much of the rest of the country.

The €20 million investment in the winery is obvious. The winery is sparkling. We pose by the horizontal rotating fermenters, the French oak barrel room, the R&D department – “Angelos’ playground,” according to Kostas. As we head towards the tasting, Chris asks him about the influence of awards and press comments. Kostas tells us that of all the awards the winery has won, gaining a spot in Wine Spectator’s Top 100 Wines in late 2015 for the Alpha Malagousia Turtles Vineyard had the biggest impact on sales. “That got us noticed.”

We taste 22 wines, highlights being:

And then we have lunch. And this is what we have (unbelievably): lentils, eggplant, grilled cheese with red pepper jam, risotto, wild boar with pasta, steak, beef in muscat sauce. And three desserts. Lunch ends at 6.45.

It’s good to be in Greece.