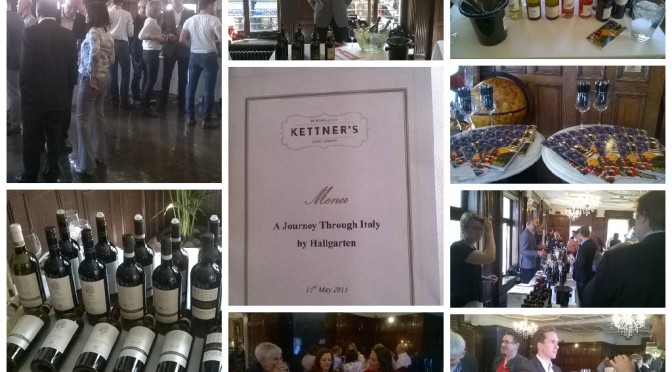 And so to Soho. Sadly, not the louche Soho of old; of the York Minster, the Colony Club, and the ghosts of Francis Bacon and Julian MacLaren-Ross. Most of it has gone now, of course, but I still get a thrill every time I walk down Old Compton Street.

Today we’re at one of the few haunts that still manages to evoke an atmosphere – Kettners, on Romilly Street –  as the second week of our Italian Roadshow hits its bootstraps. Here, in the gorgeous first floor Apartment and Studio rooms, we have assembled nine of the best producers Italy has to offer. There is a late afternoon sun streaming through the windows and the chatter is loud and insistent, as 60 or so customers spit and slurp appreciatively. An occasional grunt of approval can be heard and I smile at the site of so many sommeliers engaged in serious debate with our winemakers, faces rapt in concentration.

The Apartment is a stunning private dining room where apparently Edward VII entertained his mistress Lillie Langtry. It looks like a French film director’s lair with original wooden paneled walls, comfy ‘casting’ couches and a drinks cabinet. Next door, the Studio is an impressive private dining room, with an original fireplace and chic French furniture. I wander from one room to another. All seems to be going well. Tomorrow we are at Novikov, which will be the final destination for a roadshow which has taken in Reading and Cheltenham this second week, following visits to Glasgow, Leeds and Cambridge last week.

I smile, and walk to one side while Stefano engages with others. Over the chatter, I hear a vague sound of jazz. Is that coming from an open window? Or another part of the restaurant? And what is it? Ornette Coleman?

Ah well, I continue with the tasting. Luigi Collavini thanks me for the professionalism of Hallgarten Druitt’s staff. I thank him for the brilliance of his 2013 Broy: a stunning array of secondary fruit flavours – custard, Cadbury’s Flake, lemon zest and white peach, but with a dollop of acidity at the finish.

But I now can’t get the sound of jazz out of my brain. I walk to the side of the room and look at my tasting notes. But before I do so I close my eyes. The music and the chatter, the memories, the mood, it could be midnight. Ah, midnight in Soho and the sound of jazz and the taste of wine and the promise of things to come…

Tramin, Pinot Bianco, Alto Adige, 2013: The perfume on the approach to the mouth is refined and reserved, and the initial mouthfeel is elegant, ethereal, with a touch of lanolin. But it draws you in slowly, imperceptibly, with peaches and pears somewhere in there and it starts you thinking. And you go on thinking. Quietly devastating. I like that phrase. Quietly devastating. I think someone used it once to describe Billy Holiday’s voice. Maybe when she was singing Autumn in New York, perhaps-the music of freedom, a release from inhibitions, of the night, of the outsider.

Valle Reale, Montepulciano d’Abruzzo, 2013: Ruby-garnet colour with a dark brickish edge. Grippy blackberry fruit, cedar and meat aromas and a magnificent earthiness. Crazily gorgeous. Exciting and unusual, this wine, needs concentration, needs a good accompaniment, something out of the ordinary. Mm. Miles Davis went on stage at the 1956 Newport Jazz Festival and blew everyone apart with his haunting rendition of Thelonious Monk’s Round Midnight. Every time I listen to it I gasp. This wine has the same effect.

Umberto Cesari, “Liano” Sangiovese-Cabernet Sauvignon, Rubicon, 2012: Strap yourself to the mizzen and stand fast for the lash – this will leave you writhing with pleasure. Massive attack of fruit, dark cherries, intense strawberry and something from very very deep in the forest. Brutal and gorgeous. In Whiplash the character Fletcher tells the story of when a young Charlie Parker was playing with drummer Jo Jones and he made a mistake and Jones hurled a cymbal at his head, nearly decapitating him. In response, according to Fletcher, Parker began a period of obsessive practice that made him into one of the greatest musical geniuses of the 20th century. Well, not quite: the cymbal was thrown at Parker’s feet, not his head – but he did become a genius. His alto break on his Dial recording of A Night in Tunisia lasts only seven seconds – but it helped changed the course of music history. Definitely right for this amazing wine.

Carpineto, Vino Nobile di Montepulciano Riserva, 2009: Full of teasing blackberry fruit, mouth-filling, cheek-coating, followed by a burst of dryness and a touch spice. Tasting this wine is like standing at the chocolate fountain and dipping your strawberry into the gushing liquid. A heady and hedonistic wine. So What from Kind of Blue shows Miles Davis developing the technique of modal jazz that vastly opened up the range of improv and allowed for more musical liberties. Staggering.

Castello Vicchiomaggio, “Agostino” Chianti Classico Riserva, 2010: Very deep violet in colour. Attractive blueberry, lavender, and violet aromas, with a touch of clove.  A generosity of spirit looms large in this inky black glass of nectar. Time for a bit of drumming. In John Coltrane’s One Down One Up, Elvin Jones begins to transforms jazz drumming by stressing the upbeats of the music (instead of stressing on beats two and four). Listen to Coltrane experimenting and follow Jones as he builds up the rhythm.

Cantine San Marzano “Il Pumo” Primitivo Puglia, 2012: Huge, huge perfume, apparent even as you approach the tasting table. Vanilla, black plums, Morello cherry, dark chocolate – give me more! Supple on the palate, rich and concentrated with beautifully integrated soft tannins. Insanely drinkable. We need something to soar for this wine. Lester Young’s solo during the recording of Lady be Good with Count Basie has been described as Young’s finest solo. This from the man who invented the word “cool.” Legendary producer John Hammond said 45 years later: “It’s the only perfect, completely perfect recording session I’ve ever had anything to do with.”

As dusk approaches and the shadows lengthen and the crowd thins out, I stand in the corner watching the last few sommeliers questioning our producers. The delicious strains of the music continue to play from the street below. A beautiful brilliant tasting.