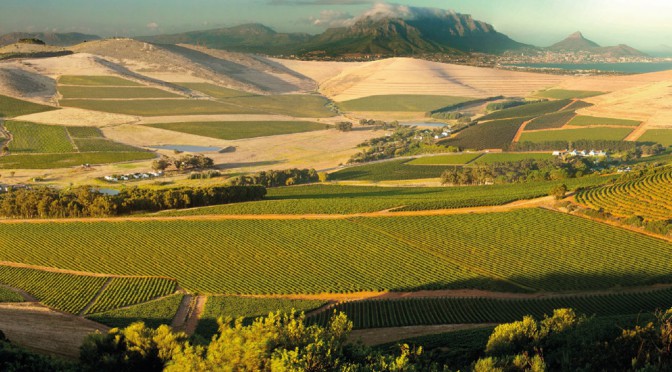 Steve and I are hanging on for dear life. Standing in the back of a pick-up, we are being thrown around as Stephan Basson slams the truck round the switchback bends of the rutted, bone-crunching trail which leads from the winery up to the surrounding mountains. We grip the rails as Stephan points out the various vineyards and tells us to look out for baboons and the leopard which puts in an occasional appearance. But we’ve asked him to bring us up here because we want to see the origin of that beautifully silky Pinotage that his wife Inalize served at lunch in the converted stables at his winery.

The views over the spectacular yellow and dusty Swartland plains take your breath away. It beats working for a living.

Finally we reach the end of the trail and Stephan points out the vineyard. This is his Pinotage. He thinks it is one of highest Pinotage vineyards in the area. The land is parched, bone dry, the vines dusty and gnarled. God, they must have to work hard to produce their grapes. Last Wine Standing wouldn’t be bad name for the voluptuous wine this vineyard produces.

Over lunch Stephan had told us his history. Nooitgedacht (Never Filled) farm was built in 1919 by Stephan’s great grandfather. In 1948 his grandfather helped found the Swartland Co-Op. When Stephan took over the winemaking in the early part of this century he won double gold with his first vintage. Some of his grapes go to the Swartland Winery. These are the grapes we want for our blends. We will speak to Pieter later.

But now we’re running late, so we work the hire car hard on the road from Malmesbury to Paarl – and miss the turning to Vryguns Farm and run into one of those endless series of road works that define the reconstruction of the Western Cape. So we are 45 minutes late for our appointment with Gerhard van der Watt, head of the Perdeberg Winery, based on the farm, which nestles in the foothills of the Paardeberg mountains. So: Perdeberg and Paardeberg. Dead easy, this.

But the very affable van der Watt welcomes us warmly – as well he might; the winery is currently picking up a raft of awards and he is anxious to show us his wares. He introduces us to the winemaker, the talented Albertus Louw. Albertus is a giant of a man, but whereas in the old days many Bok winemakers were rugby players in their spare time, now they seem to prefer mountain biking. Which makes them ever so slightly less daunting.

First up: a flight of Chenins. The entry levels are cool and fresh, beautifully balanced and with excellent typicity. The mid-levels show the full range of Chenin, from the piercing liveliness at one end to the full richness of taste at the other. But when Albertus brings out the premium level, well, we really see what Chenin is capable of. Steve suggests blending sample one with sample four and I watch Albertus’ reaction with interest. Some winemakers bristle at this point. But not Albertus, who seems delighted. “No problim, marn, lit’s give it a goah.”

A full sampling of reds follows, including an unusual and delicious Mourvedre/Malbec blend and a very perky Cinsault/Cabernet Sauvignon/Mourvedre number. God, these are good – but what’s this? With a sly grin, Albertus uncorks a Methode Cap Classique Chenin: and we revel in the intense flavours of citrus, lemon, and baked bread on the nose, followed by the fresh minerality on the palate. And while we’re reeling from this, he cracks open another beauty: a natural sweet Chenin Blanc, with unctuous honey and almond nuances. Where did this come from?

We are still tasting the dessert wine on our palates as we drive into Stellenbosch 45 minutes later. It is seven years since we both visited the town – and we simply do not recognise the place. What happened to the sleepy, one horse town that closed down at eight o’clock every night? Where did all these trendy little restaurants and art galleries and boutiques come from? Have we taken the wrong turn and ended up in the Napa Valley? We try to work the satnav as we drive round and round to find our hotel. “But didn’t the Die Braak used to be over there? Have they moved the main square?” “Wasn’t there a scruffy student pub on this corner?” Finally, after driving round for half an hour, we stumble upon our hotel – the beautiful Oude Werf, South Africa’s oldest hotel. Dropping our bags, we dash to the nearby Craft Wheat & Hops brewpub and knock back a Devil’s Peak pale ale while we watch the beautiful people go by. Either the word is changing too quickly, or we are getting old.